Norwich continued their march at the top of the Championship with a 2-1 victory at 10-man Cardiff. 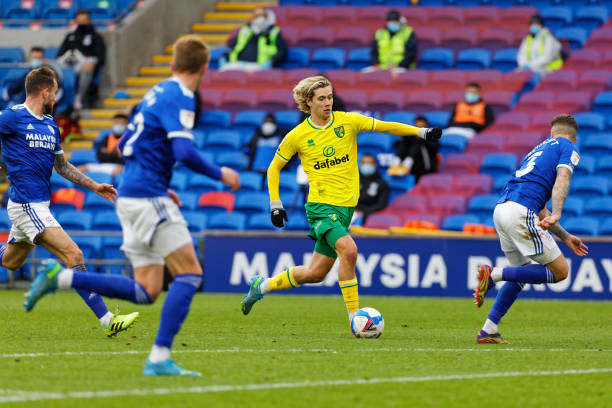 Grant Hanley and Todd Cantwell struck inside the opening 22 minutes to dent Cardiff's hopes of stopping the rot after four successive defeats in all competitions.

Joe Ralls halved the deficit after 65 minutes but Cardiff were quickly hampered when Marlon Pack, captain in the absence of the injured Sean Morrison, was sent off for a second bookable offence.

The result will pile more pressure on Cardiff manager Neil Harris, who has come under increasing scrutiny as the Bluebirds have fallen into the bottom half of the Championship.

Cardiff were boosted before kick-off by the signing of Max Watters, who had scored 16 goals since joining League Two Crawley in October.

The Bluebirds have been short of goals this season with only 29 in 22 league matches before the Canaries' visit, but they also had the welcome sight of Wales striker Kieffer Moore on the bench after being out injured for five weeks.

Cardiff could have been ahead inside 20 seconds but Harry Wilson's terrible touch denied him a one-on-one opportunity with rookie Norwich goalkeeper Daniel Barden.

It proved a costly miss as Mario Vrancic, having been denied by an Alex Smithies save, glanced on Emiliano Buendia's third-minute corner and the unmarked Hanley headed home his first league goal since August 2018.

Barden saved from Robert Glatzel at the other end but Norwich doubled their lead as the halfway point of the first half approached.

Kenny McLean's defence-splitting pass found Jordan Hugill and, although Smithies blocked well, the ball fell for Cantwell to score against Cardiff for the second time this season.

Norwich remained in control as McLean headed wide and Buendia fired into the side-netting, but there was more urgency from Cardiff after the break.

But Cardiff were almost undone again by a quick free-kick which saw McLean roll the ball into the path of the willing and speedy Max Aarons.

The right-back's cross evaded defenders and forwards alike until Vrancic swept it goalwards and Smithies pushed the ball to safety.

Cardiff had hope when Leandro Bacuna set up Ralls from 12 yards and the midfielder rifled home into the corner of the net for his fourth goal of the season.

Harris was punching the air at that point, but Pack was sent packing five minutes later after felling Oliver Skipp.

Smithies stood tall to deny Cantwell and substitute Przemyslaw Placheta late on as Norwich preserved their lead to complete a season's double over Cardiff.