Second-half strikes from Johann Berg Gudmundsson and Wales international Sam Vokes were enough to secure the win for Sean Dyche's men, who now find themselves 12th in the table having overcome a difficult start to the campaign.

Josh Murphy broke his Cardiff duck with his first Premier League goal to equalise on the hour, but Vokes' winner confirmed a fourth consecutive defeat for Neil Warnock's side. 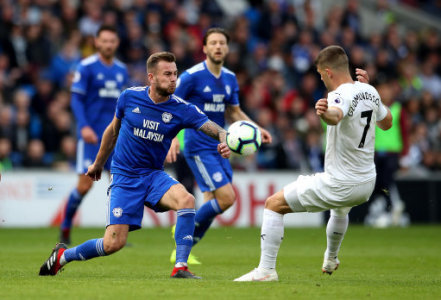 It means Cardiff, who remain second-bottom in the Premier League, are without a win from their first seven games back in the top flight.

Murphy, operating down the left, remained Cardiff's biggest threat. Having played a one-two to get into the area on 18 minutes, he tried to catch Joe Hart out at his near post, but his effort crashed off the woodwork.

Victor Camarasa released Kenneth Zohore through on goal with a clever flick-on four minutes later, but the striker's shot deflected behind. Cardiff had the ball in the back of the net from the resulting corner but Sean Morrison was penalised for climbing all over Kevin Long. 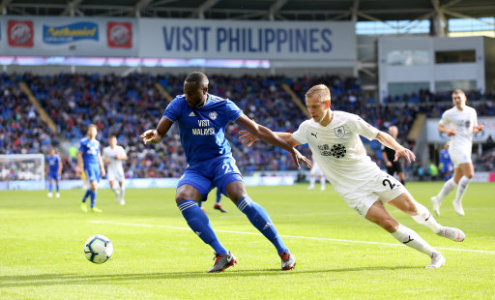 Another flick, this time from the impressive Paterson, presented Zohore with another chance on 41 minutes, and the Dane's near-post poke drew a fine save from Hart.

Morrison then kept the ball from the corner that followed, nodding it back into the area where Paterson's looping header was cleared from under his own crossbar by Matej Vydra.

Vokes' appeals for a penalty four minutes into the second half were correctly overruled by referee Martin Atkinson, who saw the Burnley forward clip his own heels after racing clear of Morrison.

But Burnley were not to be denied much longer as Gudmundsson, after outmuscling Greg Cunningham to reach a deep Ashley Westwood cross, squeezed a header past Neil Etheridge to give the visitors the lead.

Cardiff spurned a glorious chance to respond immediately as Camarasa flashed a volley over. But the lead would only last another seven minutes as Camarasa and Bruno Manga combined down the right before setting up Murphy, who arrived on the scene perfectly to rifle home the equaliser.

Murphy was denied a spectacular second as Hart brilliantly tipped his curling 20-yard effort over the bar. Three minutes later, though, Burnley were back in front as Vokes stooped to meet Gudmundsson's cross and applied the finishing touch to a flowing counter-attack.