Cardiff kept up the pressure on the Sky Bet Championship's top two as they returned to winning ways with a comfortable 2-0 victory over Bolton.

Bolton offered little in their attempts to get back into the game and this result means they will continue to look over their shoulder as they hover just above the drop zone. 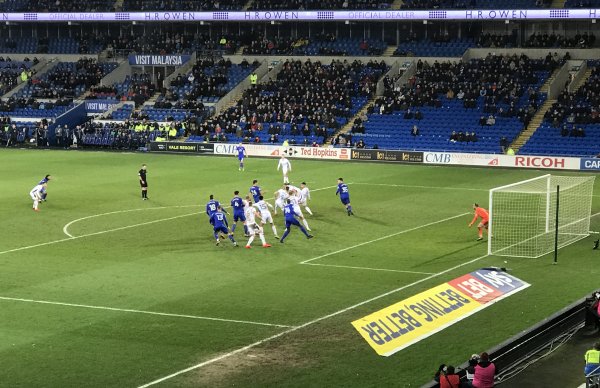 At the other end Derik Osede fired a shot wide for the visitors before Cardiff lost Jamie Ward to an early injury. The forward was replaced by Yanic Wildschut. Morrison then nearly marked his 150th Cardiff appearance with a goal and Wildschut and Hoilett also forced saves from Alnwick.

Bolton centre-half Mark Beevers should have done better with a free header on goal - but on the whole the quality of the encounter was poor.

Still, Cardiff remained the livelier in attack and they went ahead courtesy of Traore. The defender - like Ward making his Bluebirds debut - was the unlikely scorer as Paterson's long throw fell to him inside the Bolton box. He produced an expert low finish which beat Alnwick easily.

Cardiff were further clear by the break. Marko Grujic headed over and Wildschut broke clear, laid the ball off to Paterson, only to watch as the Scotland international passed the ball wide.

It mattered little, Morrison making it 2-0 in the 44th minute as he converted with a header from close range at the second attempt.

The hosts were as dominant after half-time as they were before. Bruno Manga nearly made it 3-0 when he crashed a header off the bar and Adam le Fondre, one of two former Bluebirds in Bolton's starting XI, flashed a shot wide.

Joe Ralls, who has been excellent for Cardiff this season, was the next to test Alnwick with a low drive and the one-way traffic continued.

Bolton never looked like mounting a comeback and only one team looked to add to the scoreline. Grujic curled wide and Hoilett rounded Alnwick for the second time, but there was to be no further scoring.