Cardiff kept the pace with the Sky Bet Championship front-runners with a 2-0 victory over Brentford.

Joe Ralls put the Bluebirds ahead after eight minutes before a glaring miss from Neal Maupay prevented Brentford levelling just after the half-hour mark. Cardiff then went down the other end to make it 2-0 through Danny Ward as they claimed a win that keeps them four points behind Wolves, who occupy the second automatic promotion place.

The hosts, looking to get back on track following their loss at Bristol City, started well and almost took the lead at a rain-soaked Cardiff City Stadium when Bees goalkeeper Daniel Bentley failed to catch a Junior Hoilett corner, but he recovered in time to block Sol Bamba's fierce half-volley. 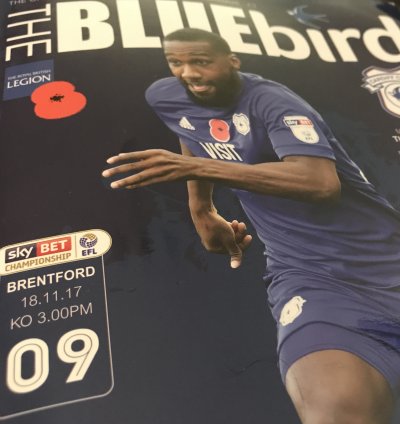 However, the breakthrough came moments later after Sean Morrison launched a long throw into the box. The ball fell to the feet of Ralls, who used his favoured left foot to fire into the back of the net.

Brentford almost equalised five minutes later when Yoann Barbet played in Maupay but Neil Etheridge reacted well to block his chipped shot. Barbet fired a shot over the bar himself, before a shocking miss from Maupay kept the hosts in front.

Cardiff skipper Morrison lost out to the Brentford striker after a weak pass from goalkeeper Etheridge. Instead of shooting into an open goal, Maupay took his time to dummy, before sending the ball wide of the post under pressure from Craig Bryson (see video below).

To make matters worse, Cardiff made it 2-0 in the 36th minute to all-but seal three points. Bruno Ecuele Manga intercepted the ball and charged forward, playing a one-two with Loic Damour before crossing for Ward to prod home.

Maupay had a pair of chances to get his side back in the game after his glaring first-half miss. The Frenchman sent a shot wide two minutes after the restart and then had Etheridge worried with a strike that flew just over the crossbar.

Hoilett should have put the contest to bed after Liam Feeney and Ward combined, but he failed to find the target from 10 yards out. Only Joe Bennett stopped Dean Smith's side from getting a goal back after 67 minutes as substitute Sergi Canos twice came close.

Canos first had a shot saved by Etheridge, before the ball fell to him in the box for a second attempt. But Cardiff left-back Bennett got back on the goal line to prevent the ball from hitting the back of the net, and Cardiff coasted to victory.