Second-half goals from Joel Bagan and Mark Harris enabled Cardiff to make it back-to-back home wins as they beat Coventry 2-0. 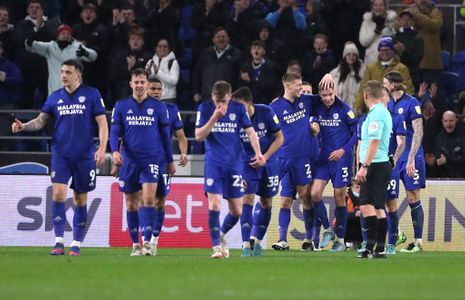 Three days on from notching his first goal for the club, 20-year-old wing-back Bagan opened the scoring in the 72nd minute and Harris sealed the win three minutes from time.

Back at the ground where a week earlier they had put four goals past relegation rivals Peterborough to move 12 points clear of the danger zone, Cardiff started well and went close to an opener after only three minutes.

Bagan floated in a deep cross from the left and Max Watters headed down in front of Coventry goalkeeper Simon Moore. The ex-Bluebird went back into his goal and then flung himself forward to catch the bouncing ball and just about stop it from crossing the goal line.

Having spent the first 10 minutes weathering a bit of a home storm, Coventry got into their stride and worked dangerman Callum O'Hare into the action.

Having picked up a loose ball in the centre circle he drove all the way to the edge of the Cardiff area before firing off a shot that flashed inches wide of the right hand upright.

Three minutes later O'Hare had two shouts for a penalty in the same move. Viktor Gyokeres found space on the right and played the ball into the box for O'Hare to run onto.

He found himself sandwiched between two defenders and went for an elaborate dive between the pair of them. He got up to find Alex Smithies had lost possession of the ball and chased it down, only to find his ankle tapped by the 'keeper.

Referee John Busby waved play on in both incidents and the only other attempt on goal came at the other end in the 34th minute when Watters ran onto a ball over the top and hammered a left-footed volley that was only kept out by Moore's head.

Three minutes later Watters was replaced by Jordan Hugill and demonstrated his dismay by sitting in the dug-out for the whole of half-time and the rest of the game.

Hugill should have broken the deadlock in the 54th minute when a brilliant piece of work down the right by Cody Drameh cut Coventry wide open.

The wing-back put the ball into the path of the onrushing Hugill, but the striker got the ball caught under his feet and his shot was easily saved from 10 yards.

Bagan cut inside on the left edge of the box and fired an unstoppable shot into the right corner to give Cardiff the lead.

Then Harris outstripped the defence on the right and fired home.