Cardiff created club history as a 2-0 victory over Sheffield United kept them top of the Sky Bet Championship.

The Bluebirds had never started a campaign with three league wins in their 118-year history. But that statistic was consigned to history as Sean Morrison and Nathaniel Mendez-Laing put the gloss on a performance that suggests Cardiff are credible promotion contenders this season.

United were game opponents after beating Brentford and losing in controversial circumstances at Middlesbrough on their return to the Championship. But the Blades were often cut apart by Cardiff's attacking verve and the only issue that will concern Bluebirds manager Neil Warnock is that his side did not win by more. 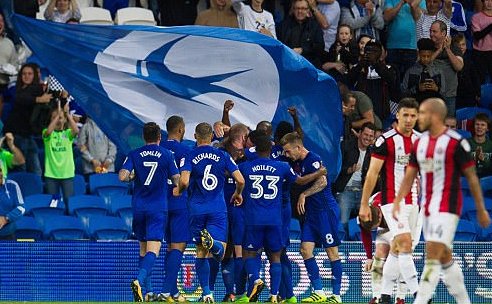 Cardiff were buoyant after backing up their opening-day win at Burton with a 3-0 beating of Aston Villa, one of the favourites for promotion to the Premier League. They smacked of a team high on confidence and Lee Tomlin, restored to the starting line-up, nearly unlocked the Blades defence after 11 minutes.

Tomlin tricked his way past two defenders and when the ball was played back to him off Morrison he rolled it narrowly wide.

United were defending resolutely but had to rely on lady luck when full-back Jazz Richards almost became the unlikeliest of scorers. Richards has never scored in his senior career, but the crossbar was still shaking several seconds after he had struck it from 30 yards.

Billy Sharp fired into the side netting from a rare Blades attack and Sol Bamba was relieved nothing came of it when the ball appeared to strike his arm in the box.

Cardiff might have secured the lead their approach play deserved after 33 minutes when Junior Hoilett put Kenneth Zohore through on goal. The Danish striker guided his effort wide of Jamal Blackman's right-hand post.

But Cardiff were not to be denied and Morrison met Joe Ralls' corner a minute before the break with a thumping header.

The interval did not disrupt Cardiff's rhythm and Blackman stopped Zohore from adding a third before Tomlin blazed over the rebound. Zohore sent another effort just wide but Cardiff had breathing space after 55 minutes.

Bruno Ecuele Manga found Mendez-Laing and the winger dragged the ball back on to his right foot to deliver a ferocious shot for his fourth goal in as many games. Neil Etheridge made late saves from David Brooks and Chris Basham, but Cardiff's margin of victory did not flatter them.