Hoilett converted Josh Murphy's low cross to open the scoring in the fourth minute as the West Ham defence stood statuesque, and Camarasa (52) doubled the lead from close range after a lovely cushioned header into his path from Murphy 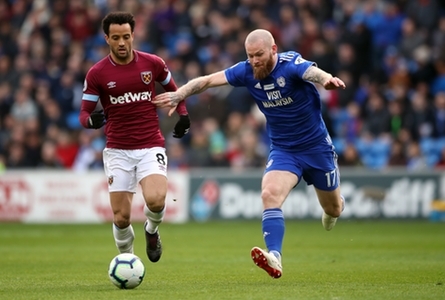 Oumar Niasse had the chance to make sure of the points soon after but shot wide after bursting through on goal, before being denied again when Lukasz Fabianski saved from point-blank range and then reacted to keep out Murphy's follow up.

Declan Rice came closest for West Ham when he hit the post with 20 minutes remaining, but the visitors offered little threat across the 90 minutes.

Despite claiming an important victory, Cardiff remain in the bottom three, two points from safety, following Southampton's win over Tottenham, while West Ham stay in ninth.

Aiming to bounce back after three straight defeats, Cardiff made a quick start and were rewarded within four minutes.

Camarasa slid the ball into the path of Murphy down the right, he crossed first time for Hoilett, who drifted in at the near post, seemingly unnoticed by the four West Ham defenders in the vicinity, and flicked the ball smartly past Fabianski.

With the crowd behind them, Cardiff pressed for a second and nearly got it after a mix-up between Fabianski and Issa Diop allowed Niasse to steal in. His touch took him wide and with the angle against him, put his shot just over the bar.

West Ham grew into the game as the half went on but despite keeping Cardiff penned inside their own half, goalkeeper Neil Etheridge did not have a save to make before half-time.

The visitors sent on Marko Arnautovic at the start of the second half but again it was Cardiff who made the brighter start and again, they made the pressure tell.

Ryan Fredericks sliced an attempted clearance back towards his own goal, allowing Hoilett to get to the byline and whip in a superb cross. Murphy unselfishly nodded the ball back across goal into the path of Camarasa, who, having been played onside by Fredericks, forced the ball home at the far post.

The hosts should have been further ahead before the hour mark when the superb Aron Gunnarsson won the ball back in midfield and found Niasse. The on-loan Everton striker confidently knocked the ball past Diop and surged through on goal, only to put his shot a yard wide.

Moments later, Cardiff were in again but Niasse was unable to finish from inside the six-yard box, putting his volley too close to Fabianski, who was up quickly to keep out the rebound from Murphy.

Rice came close to getting West Ham back into the game in the 70th minute, ambling up to the edge of the Cardiff box as the defence backed off and firing a shot beyond Etheridge and against the post.

Arnautovic forced a smart save from the Cardiff 'keeper five minutes later but that was as good as it got for the visitors; their hopes of sneaking into a Europa League place dented, while Cardiff keep pace in the battle for survival.