After Bamba himself and Calum Paterson had both hit the woodwork in a goalmouth scramble, the defender slammed the second rebound into the roof of the net to hand Cardiff a valuable three points. 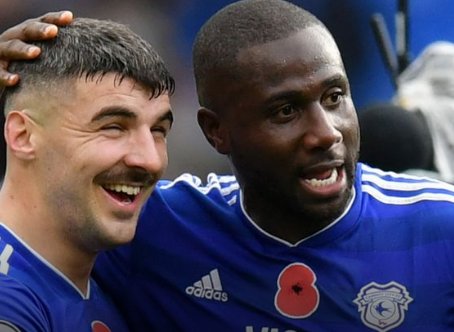 Lewis Dunk's header had earlier put Brighton ahead (6), Paterson replied for Cardiff with another close-range header (28), before Brighton were reduced to 10 men as Dale Stephens saw red for a rash challenge on Greg Cunningham (33).

The hosts had more of the possession but could not break Brighton down until the last-minute melee, and the win means Cardiff move out of the Premier League relegation zone.

But the hosts were level with a header of their own through Paterson, nodding into the net from three yards after Kadeem Harris, making his first Premier League start, caused issues for Brighton down the right flank as his deflected cross looped into the striker's path.

And Brighton's task was made harder after Martin Atkinson dismissed Stephens, who had raised his studs in a challenge with Cunningham on the halfway line.

Harris impressed throughout, and hit the bar with a 25-yard left-footed curler in the second half, and though Cardiff pressured throughout the second period, the next best chance fell to Brighton.

Cutting inside from the left, Jose Izquierdo's fierce effort moved in the air and forced Neil Etheridge to awkwardly tip over the bar.

Then came the melee which won it for Cardiff. First, Bamba's overhead kick bounced off the post, then Paterson's rebounded strike was superbly deflected onto the bar by Dunk, only for Bamba to react and turn into the net from six yards through the crowd.