Peter Whittingham and debutant Sol Bamba got the goals as the Bluebirds picked up just a third win of the season to climb out of the relegation zone.

Lee Tomlin got a goal back for the visitors but it was not enough as they missed the chance to climb to second in the table.

Warnock handed debuts to new signings Bamba and Junior Hoilett, as well as to Joe Bennett, who had struggled for fitness following his summer arrival from Aston Villa. 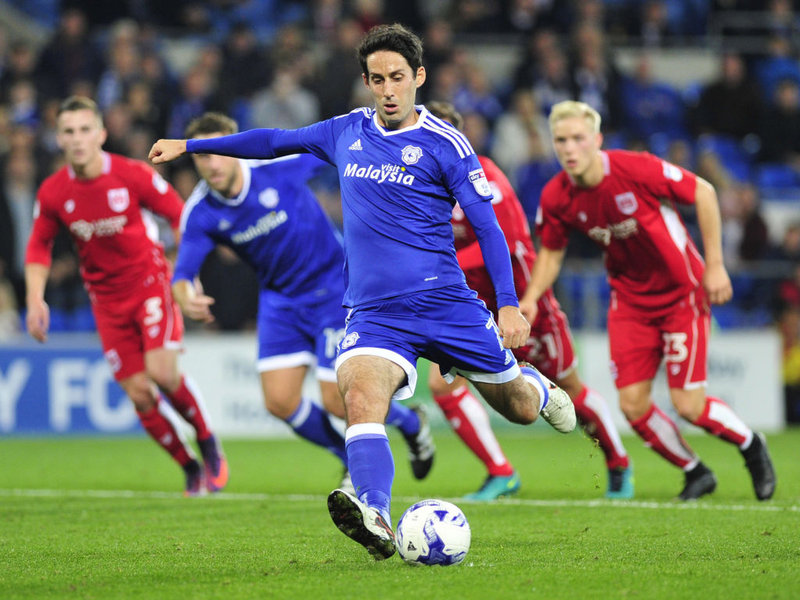 Unsurprisingly his side came flying out of the blocks, pressing the ball in packs and working hard to disrupt the visitors passing game.

They survived one early scare as the referee waved away an early Bristol City penalty appeal as Tomlin went to deck following a surge into the area.

As the tempo of a frantic start began to wane, it was the Robins who looked the more assured side

Tomlin was finding pockets of space to operate in, with Luke Freeman and Jamie Paterson also looking lively.

Freeman drove a shot wide from the edge of the area from a smart Tomlin pass, but their momentum was rapid halted by the contentious penalty award.

Craig Noone appeared to be offside as he raced onto a Joe Ralls pass, only for the flag to stay down and Bryan to trip the Cardiff winger after being nutmegged just inside his own box.

It was the first time a Cardiff player had scored on home turf all season.

The goal knocked Bristol City out of their stride and Cardiff surged forward with a renewed belief and were aggrieved when Hordur Magnusson appeared to foul Hoilett as he prepared to send Noone in on goal.

Captain Sean Morrison headed a Whittingham corner over, while Magnusson survived another Cardiff penalty claim as Noone's header across goal seemed to strike his hand.

It left Johnson needing to find a way to turn the contest around at the break.

There were encouraging signs upon the resumption

Paterson was worked free down the right-hand side, but he was unable to pick out Tammy Abraham as the striker waited at the far post.

But they were fortunate to escape at the other end as Ralls volleyed a Noone cross wide when unmarked, and it prompted Johnson to send on Bobby Reid and Aaron Wilbraham for Marlon Pack Jamie Paterson.

Reid quickly made inroads down the flank but twice failed to deliver from encouraging positions as the visitors' frustrations increased.

The game looked beyond them when Bamba turned in a rebound from close range after Rickie Lambert struck the bar in the 67th minute.

But Tomlin responded with a fine low drive and tempers briefly flared as Aron Gunnarsson chose to confront the midfielder as he celebrated.

But it was not enough to spoil Warnock's night as Reid missed a late sitter to seal a share of the points.