City looked to have blown the chance for a home win after Trevoh Chalobah had cancelled out Joe Ralls first half goal (pictured). 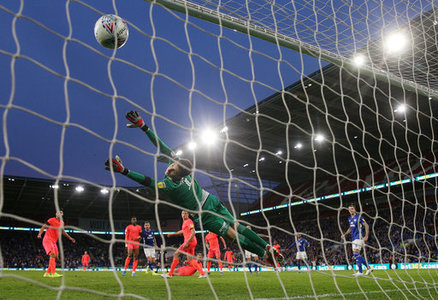 City were good for their lead at half time and should have been further ahead with very good chances missed by Rober Glatzel and Leandro Bacuna and the Huddersfield keeper tipped over a Josh Murphy effory. Huddersfield managed one effort on goal that was saved well by Alex Smithies.

The catalyst of much of City's good play was Lee Tomlin. A man of the match performance on his return to the side. It was good to have a creative mind back in the side.

As against Luton though City allowed the visitors a way back. Chalobah looked to have little on when he twisted and turned to beat Smithies from distance. Huddersfield were more in the game now but still the best chances fell to City. Bacuna saw his free kick hit the bar as Cardiff looked to pile the pressure on. City were still vulnerable to a break away but Huddersfield had nothing like the quality Reading showed on Sunday and they were punished with less than two mins of normal time left.

A clever run by Junior Hoilett was spotted by Josh Murphy who found the Canadian and faced by three defenders Hoilett found space to shoot into the net via a deflection. City saw out the four added minutes to keep up a 100% winning home record (to go with the 100% losing award record - but hopefully that will change on Saturday).