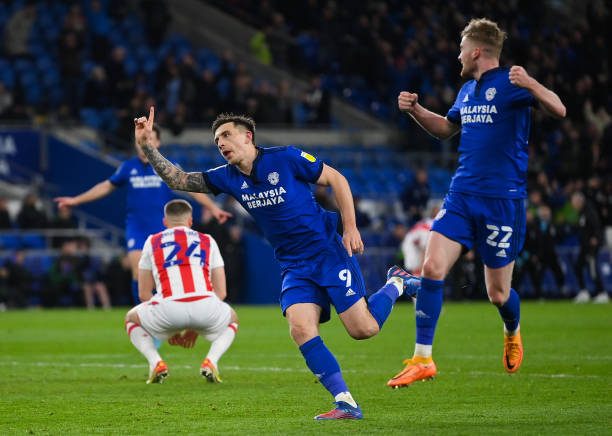 Stoke took the lead with their first opportunity as Lewis Baker curled beyond Alex Smithies from distance.

The hosts equalised before the break when Tommy Doyle showed composure to slide the ball under Jack Bonham.

The victory sees Cardiff move level on points with Stoke as they stay in 17th, a place below the Potters and a point below rivals Swansea, who are 15th.

This was a contest between two clubs going in opposite directions in the Championship table, with Cardiff on their best run of the campaign, having accrued seven points from nine, while Stoke were winless in seven league games.

Stoke boss Michael O'Neill made four changes to the side held by bottom-of-the-league Peterborough, with Ben Wilmot, Morgan Fox, Romaine Sawyers and Tyrese Campbell all recalled, while Cardiff boss Steve Morison made two changes to the team held by Preston.

The Bluebirds made a slow start against Preston but were brighter in the early exchanges against Stoke with Cody Drameh impressive as he continued to pressure the Stoke defence.

Cardiff's pressure eventually led to a chance with Drameh crossing for his opposite wingback Joel Bagan who was denied by a stunning save from Stoke goalkeeper Bonham who somehow tipped the ball onto the crossbar after Bagan cut inside and shot powerfully.

That save was rewarded two minutes later when Stoke took the lead against the run of play as Baker curled home an effort from outside the penalty area that Cardiff goalkeeper Alex Smithies will feel he could have prevented, with Baker's curling right-footed effort sneaking past Smithies' dive.

Cardiff could have levelled within minutes after Perry Ng's intelligent ball over the top caught Stoke defending too high, but Mark Harris blazed wide and over as he lost his composure at the vital moment.

However, Harris made amends on 38 minutes when he won possession and found Bagan who released Tommy Doyle who slid the ball under Bonham to give Cardiff a deserved equaliser.

The goal lifted Cardiff who went into the interval ahead after Harwood-Bellis was pressed into conceding possession and Drameh found Hugill, who curled the ball smartly beyond Bonham from just outside the penalty area.

Stoke's travelling fans would have hoped for a response from conceding twice in four minutes, but it was Cardiff who came closest to adding to the scoring shortly after the interval, but Harris headed wide from Doyle's deep cross.

Harris also tested Bonham after Drameh again won the ball in a dangerous area, while at the other end Stoke threatened from a corner that Smithies missed entirely, but the ball drifted wide.

Smithies was not having his best night and he also looked shaky as he parried Josh Tyman's long-range effort, but Stoke were unable to regularly test Smithies.

It was Cardiff who looked more likely to add to the scoring, but Aden Flint headed at Bonham from Joe Ralls' corner and Bagan's teasing cross flashed across goal without a decisive touch, while Bonham saved Isaak Davies' late effort.