Blackburn striker Adam Armstrong struck a last-minute equaliser to snatch a 2-2 draw at Cardiff in the Championship. 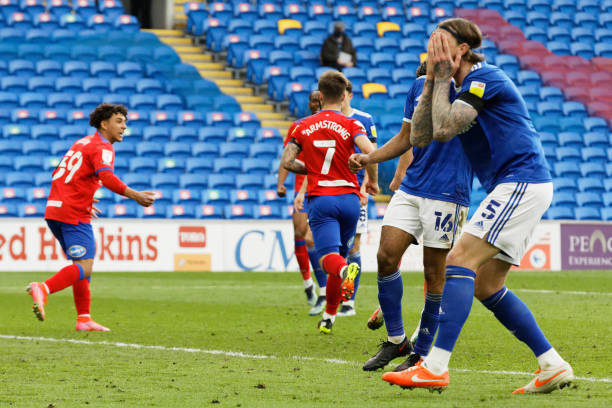 A mistake from Bluebirds goalkeeper Alex Smithies allowed Armstrong to score his first goal for the visitors after Will Vaulks gave Mick McCarthy's team the lead with a free-kick in the first half.

Joe Ralls came off the bench and looked to have sealed victory against the run of play, but Armstrong completed his double in the 90th minute to leave City nine points off the play-off places with just five games to play.

McCarthy made four changes to his side after he suffered his first major setback as Cardiff manager with Easter Monday's 5-0 defeat at Sheffield Wednesday.

Smithies endured a tough return to the side after two months on the bench at the expense of Dillon Phillips, who impressed after Smithies suffered a head injury against Bristol City, while Perry Ng was included at right wing-back and Josh Murphy and Harry Wilson came into an attacking line-up in place.

Blackburn manager Tony Mowbray made a pair of changes to the side beaten by Bournemouth last time out, bringing in Lewis Travis and Sam Gallagher for Tyrhys Dolan and Joe Rothwell.

It has been more than a month since Wales striker Kieffer Moore scored for Cardiff, but he had two early chances to end his goal drought.

The first came after he surged past Darragh Lenihan into the box, only to be denied by a last-ditch tackle from Tom Trybull.

He dragged a half-volley wide moments later with the goal gaping, but the Cardiff pressure told in the 27th minute after Moore was brought down on the edge of the box.

Wilson looked as if he was going to strike the resulting free-kick, but he back-heeled the ball for Vaulks to shoot low into the bottom corner.

But Blackburn levelled in the 43rd minute after a Smithies mistake. Armstrong raced in behind Ciaron Brown and shot low straight at the Cardiff goalkeeper, but Smithies failed to gather and watched the ball hit the back of the net.

Blackburn struck the woodwork three times in the second half as they went in search of a winner.

Sam Gallagher and Bradley Johnson both hit posts before Barry Douglas rattled the crossbar, but it was Cardiff who scored to seemingly reignite their promotion dreams after 70 minutes.

Substitute Ralls got a toe to the ball to divert Thomas Kaminski's clearance into the path of Wilson, who played the ball back for Ralls to calmly side-foot home.

But Armstrong cut inside Aden Flint and stabbed the ball past Smithies seconds before the game entered stoppage time to steal a share of the points and dash Cardiff's Premier League hopes.