Cardiff staged a first-half fightback to come from two goals down to claim a 2-2 draw against promotion-chasing Brentford.

Luka Racic's early strike and Bryan Mbeumo's accurate free-kick had the Bees on course for a result that would have cemented their status in the play-off places. 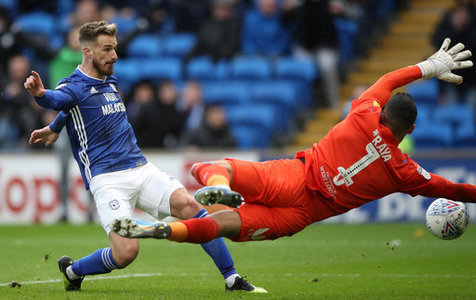 But the hosts rallied to get back on level terms thanks to headers from Junior Hoilett and Joe Ralls.

The draw leaves Brentford just three points clear of Bristol City after their fifth game without a win.

Bees head coach Thomas Frank made two changes after their away defeat at Luton, as Shandon Baptiste dropped out of the starting XI after his own goal at Kenilworth Road and Racic replaced fellow Dane Mads Roerslev.

Cardiff had lost both matches without scoring a goal since losing Lee Tomlin to a long-term injury and manager Neil Harris handed midfielder Ralls his first start since December after he recovered from a glute injury.

Albert Adomah came back into the side for Josh Murphy, and Leandro Bacuna was also included despite his on-field bust-up with team-mate Callum Paterson.

All was not well in the Cardiff camp again after they conceded twice in the opening 20 minutes.

It took only five minutes for Racic to calmly put the Bees ahead with his first senior goal after Henrik Dalsgaard's header fell at the feet of the defender.

Cardiff offered little in response before the visitors doubled their lead after 19 minutes. Hoilett rushed back towards his own goal and tripped Emiliano Marcondes on the edge of his box. Mbeumo stepped up and curled a left-footed free-kick over the wall and past Alex Smithies to make it 2-0.

Paterson headed against the post as the Bluebirds began their recovery, but it looked as if their progress would be undone by Will Vaulks after he appeared to have used his knee to connect with the head of Christian Norgaard, who had slid in to make a well-timed tackle.

The midfielder got away without even a foul, and went on to play a key role in the Cardiff fightback.

It was Vaulks' pass that played Adomah in behind the defence on the right flank before he curled the ball in for Hoilett to get across Mbeumo and head in.

The unlikely turnaround was complete in the final minute of the first period after Sean Morrison flicked Vaulks' long throw on for Ralls to out-muscle Josh Dasilva at the back post and head in the equaliser.

Cardiff could have snatched it with 10 minutes to go when Paterson's driven cross reached Joe Bennett at the back post, but the full-back shot wide from four yards out.