Shkodran Mustafi headed the Gunners in front after 12 minutes from an Aaron Ramsey corner, but Cardiff had several chances to level before Víctor Camarasa turned Joe Bennett's cross home at the second attempt in first-half injury-time to finally net their first goal of the season. 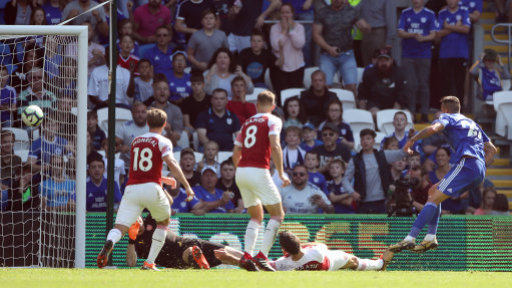 The goals kept flowing after half-time with a brilliant curled Pierre-Emerick Aubameyang finish from outside the box (62) putting Arsenal back ahead, before Danny Ward levelled from a Sean Morrison flick at a free-kick (70).

But Emery's first away success was secured nine minutes from time when Lacazette swivelled and fired a rocket of a shot inside Neil Etheridge's near post.

Harry Arter should have put Cardiff ahead inside seven minutes as the hosts stifled the space Arsenal wanted to play out from the back, but, after intercepting a wayward Petr Cech pass to Matteo Guendouzi, he blazed over when unmarked on the edge of the area. 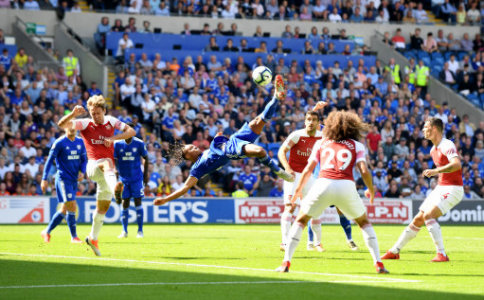 Arsenal showed more clinical finishing when they took the lead soon after, as Ramsey's corner was met with a bullet header from Mustafi to leave Etheridge helpless in the Cardiff goal.

Arter had another good chance from Morrison's knock-down but could not keep his shot down again, but on the stroke of half-time Cardiff finally broke their goalscoring duck.

Granit Xhaka's lazy cross-field ball was picked off by Junior Hoilett and Bennett's cross took a nick but fell kindly for Camarasa, who fired high into the net as Cardiff became the last of the 92 teams in the domestic football pyramid to register their first goal.

After half-time Arsenal began to win the midfield battle, but for all their possession they struggled to test Cardiff until Lacazette's deft back-flick found Aubameyang's run and he curled a beautiful strike into the far corner. 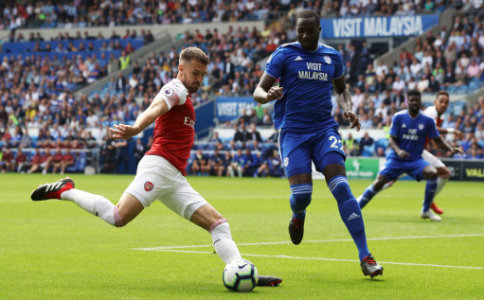 Cardiff instantly responded, having found their shooting boots, and Morrison was again used from a free-kick, this time to nod back across goal where Ward was waiting to head in off the far post.

Just as Cardiff looked like they might earn an impressive point, Xhaka's pass into the box found Lacazette on the turn and he struck a shot so powerful Etheridge barely moved as it whistled inside his near post.

Cardiff had a glorious chance to level in the final minute of stoppage time but Morrison, at it again, headed over from a free-kick with Cech off his line.