Sheffield United fought back from a goal down to beat 10-man Cardiff 3-2 thanks to a second-half masterclass from Morgan Gibbs-White. 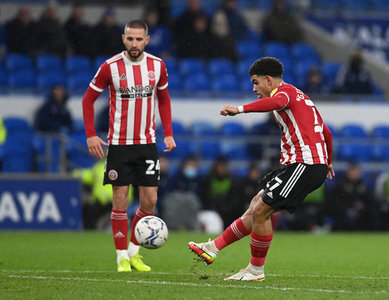 The midfielder, on loan from Wolves, scored a stunning equaliser before laying on goals for Billy Sharp and David McGoldrick after Cardiff captain Sean Morrison was sent off in the 52nd minute.

It was the least the Blades deserved after dominating the first half only to go in a goal down.

Veteran striker Sharp could have had an early brace but the 35-year-old failed to get enough power on his header from Jayden Bogle's cross from the right and then fired against the legs of Cardiff goalkeeper Alex Smithies a minute later after being put through by Gibbs-White.

The chances kept coming for Paul Heckingbottom's men as Conor Hourihane curled just over from the edge of the area after Oliver Norwood picked him out from a corner, and McGoldrick shot straight at Smithies from the left of the six-yard box.

Sharp then turned provider as he crossed from the left but Gibbs-White's stabbed effort was well wide.

Having created nothing for half an hour, Cardiff could have scored three in four minutes but they had to settle for one.

That warmed the home fans on a bitterly cold afternoon and it also appeared to rouse the Cardiff players as they broke the deadlock two minutes later.

Mark Harris controlled a delightful chipped through-ball from Joe Ralls on his chest before turning in the area and expertly firing past Foderingham in the 32nd minute.

And Isaak Davies was close to doubling Cardiff's lead two minutes after that with a brilliant run into the box and a fierce drive that was palmed away impressively by Foderingham.

The match swung in the visitors' favour seven minutes after the restart when Morrison was shown a straight red card for chopping down Sharp as he raced on to McGoldrick's through-ball.

Gibbs-White wasted the subsequent free-kick from the edge of the box but he made amends in some style with an unstoppable curling effort from 20 yards to level the match after 61 minutes.

McGoldrick almost squeezed in a second for United a minute later but Smithies just about scrambled it off the line.

Sharp completed the fightback on 73 minutes as he finished off a quickfire passing move from close range by firing in from Gibbs-White's centre.

And McGoldrick put the result beyond doubt two minutes later as his shot trickled inside the post after another assist from Gibbs-White.