There might only have been 4,194 present - the lowest crowd in the six-year history of the Cardiff City Stadium - as home fans showed their apathy following a poor run of league form under manager Russell Slade.

But if the magic of the cup was in short supply off the pitch, Slade's men did not let it affect them as the Sky Bet Championship club made light work of opposition one place off the bottom of League One.

A deflected Joe Ralls shot gave the home side a half-time lead and then further strikes from Kadeem Harris and substitute Kenwyne Jones increased the gap before Colchester netted a consolation goal through Freddie Sears 16 minutes from time. 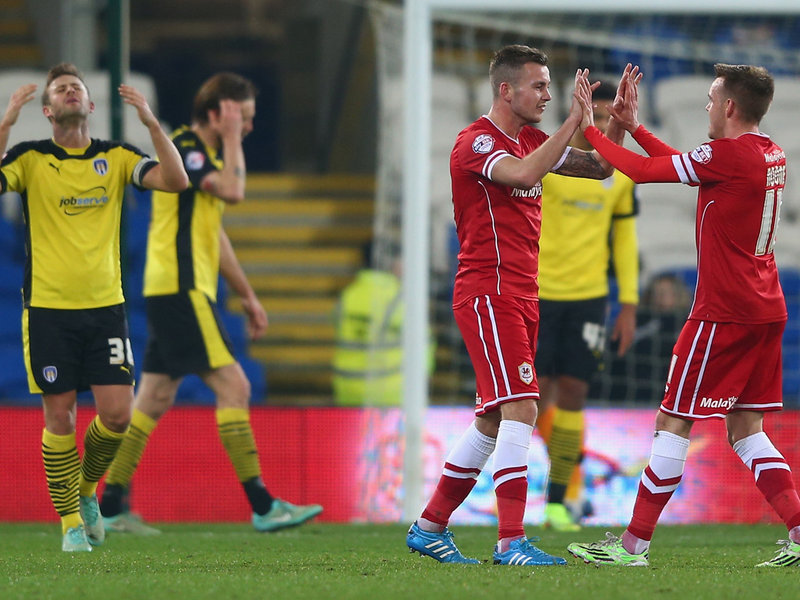 Peter Whittingham's own corner cleared Walker's head and struck the woodwork but Cardiff were ahead after 34 minutes when the ball invitingly to Ralls 25 yards out. The shot was well hit but the fact Walker was left totally wrong-footed was down to a cruel double deflection, first off Gorkss and then Cole Kpekawa which left the latter possibly fearing that he might be credited with an own goal.

Tom Adeyemi almost doubled Cardiff's lead when he powered through to unleash a 20-yard shot which Walker pushed away and there was an even better stop at the other end moments later when Moore dived low to his right to deny Gavin Massey.

Cardiff extended their lead after 53 minutes when Ben Turner met Whittingham's corner and the ball ballooned into the air and Harris reacted quickest in a crowded penalty area to hook home.

Colchester conceded a third goal on the hour when Jones scored with his first touch after replacing Federico Macheda, Cardiff's top goalscorer moving into double figures for the season when nodding home Whittingham's corner unchallenged.