Cardiff moved another step closer to the Premier League with a hard-fought 3-1 triumph over Burton writes PA Sport.

Neil Warnock's side racked up their eighth successive win thanks to goals from Kenneth Zohore, Nathaniel Mendez-Laing and Callum Paterson (pictured), who netted for the fourth time in as many games.

Darren Bent levelled the scores in the first half, but Nigel Clough's men could not stop the Bluebirds from maintaining their seven-point gap over third-placed Fulham. 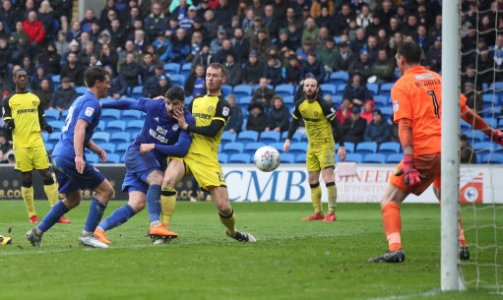 Second-bottom Burton are four points adrift of safety, while there are only eight games and 14 points standing between Cardiff and promotion.

The Brewers almost caught Cardiff cold twice in the opening five minutes. Their first chance came when Jamie Allen's tempting free-kick was met by Liam Boyce, but Bluebirds captain Sean Morrison was on hand to clear it away.

The pair combined again moments later but this time Boyce's header flew well over the bar under pressure from Neil Etheridge.

The visitors were made to pay after 16 minutes when Junior Hoilett controlled Joe Bennett's pinpoint ball and charged past John Brayford.

The Canada international had four to pick from but found Zohore, who volleyed past Stephen Bywater to score his fourth goal in six matches.

But it did not take long for Burton to spoil the party at the Cardiff City Stadium. Boyce played a key role again when he sent Lloyd Dyer haring in behind the back four after 22 minutes. The winger whipped the ball across the face of goal and Bent raced to the back post to tap it in.

The Bluebirds struck a killer blow in the first minute of added time to get their noses in front again. Zohore flicked the ball on for Mendez-Laing to charge towards goal, and when Bywater failed to meet him, he blasted the ball into the roof of the net.

Morrison had a second-half header ruled out for a push on Bywater, but Cardiff made sure they would be going 12 games unbeaten after 64 minutes.

Hoilett glided past Brayford and fired the ball across goal. The chance looked to have gone when it ricocheted off Craig Bryson, but Paterson pounced to score his ninth of the season.

Marko Grujic had the opportunity to put the icing on the cake when Hoilett cut in and delivered an incisive pass, but Bywater stuck out a leg to block the shot.

Warnock takes his Cardiff side to his former club Sheffield United on Monday knowing they need a maximum of five wins to go up.