Cardiff returned to the top two of the Sky Bet Championship as goals from Junior Hoilett, Omar Bogle and Danny Ward gave them a comfortable 3-1 victory over Ipswich.

Neil Warnock's men had failed to find the net in both of their last two home games, but Hoilett's fourth league goal of the season gave them a narrow half-time lead. Bogle's strike made it 2-0 right at the start of the second period and although Bersant Celina's late goal got Ipswich back into the game, Ward wrapped up the three points.

Hoilett put an early shot wide, but one of Cardiff's best players this season gave his team the lead in the 12th minute, converting Nathaniel Mendez-Laing's cross at the back post. 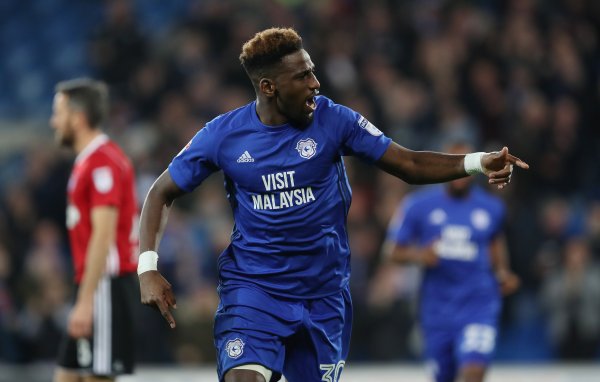 After opening the scoring, Hoilett nearly turned creator. His inch-perfect cross was poked towards goal by Bogle, but Ipswich goalkeeper Bartosz Bialkowski produced a smart low save.

The visitors offered little as an attacking threat in the early exchanges, their best chance coming when Sol Bamba fouled Flynn Downes on the edge of the Cardiff box.

Celina could only put the free-kick straight into the blue wall, while minutes later Tommy Smith failed to convert at the back post. Both sides had further chances before the break, Mendez-Laing driving into the side netting when he should have crossed, while Downes was only denied a certain goal by a diving Joe Ralls block.

Cardiff should have been more than a goal clear at the break, but they doubled their advantage in the first minute of the second half.

Bogle, who impressed throughout, was the scorer. The former Solihull and Grismby striker made the most of Lee Tomlin's superb flick and 30-yard pass, running clear on goal and calmly slotting the ball past Bialkowski.

Full of confidence, Bogle nearly made it 3-0 while Callum Paterson and Tomlin - who pulled the strings for Cardiff - also had shots saved as the hosts took total control. Ipswich never looked like getting back into the game with Grant Ward an isolated figure as the spearhead of the Tractor Boys' attack.

With Saturday's clash with fellow high-flyers Bristol City perhaps in mind, Warnock removed former Robins playmaker Tomlin from the fray and introduced Loic Damour into midfield in the 66th minute. The game had long since appeared to have been decided as a contest, but there was still time for some late drama.

Celina side-footed the ball home in the 89th minute to make it 2-1, but Cardiff went straight up the other end and substitute Ward slammed home to ensure the three points.