Two goals from Kenneth Zohore helped send Cardiff City top of the Sky Bet Championship on Tuesday with a 3-1 victory against 10-man Leeds.

The visitors were in first place on goal difference heading into the match, but were outclassed by their Welsh opponents, with Zohore sweeping home the opener in the 28th minute.

Junior Hoilett powered home Cardiff's second in the 37th minute with Leeds captain Liam Cooper sent off in first-half injury time for a second yellow card to cap a dismal first period for the visitors. 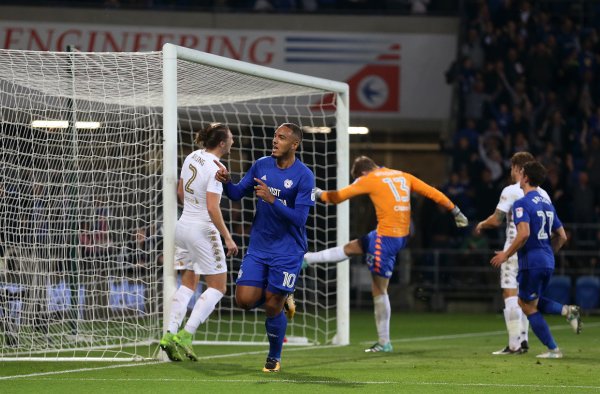 Zohore nabbed his second 13 minutes after the restart with a back post tap-in, but Leeds were able to muster a reply as Kemar Roofe's strike was deflected home by the foot of Sean Morrison.

Cardiff are now three points clear at the top of the table with Leeds sitting in second on 20 points, joint with Wolves, who play Sheffield United on Wednesday.

Chances were at a premium for much of the opening half an hour, but Zohore netted his first goal in eight games midway through the first half. Mateusz Klich was dispossessed by Loic Damour, who raced down the left wing before picking out Hoilett. He then made his way into the box before squaring for Zohore, who coolly slotted home.

They added a second nine minutes later with another superb goal. Cardiff goalkeeper Neil Etheridge pumped the ball up the field that was headed into the path of Hoilett by Kalvin Phillips. He controlled the ball and turned before racing towards goal and firing home from just outside the box, adding to his assist for the opening goal.

It went from bad to worse for Leeds in the third of four added minutes as captain Cooper was sent off for a second bookable offence after two crunching tackles on Nathaniel Mendez-Laing. It could have been an instant third for Cardiff after his red card, as Morrison poked home the free-kick at the near post, but the offside flag was raised.

But the hosts did add a third to their tally in the 58th minute. It came from some superb passing play between Cardiff's attacking players, with Hoilett picking out Morrison down the right of the box, whose cross-come-shot was diverted away by the fingertips of Felix Wiedwald. However, Zohore was lurking at the back post to tap home for his second of the evening.

Leeds were able to muster a reply nine minutes later, although it came with an eventual touch of good fortune. Luke Ayling got away down the right flank before cutting the ball back to a waiting Roofe at the top of the box, whose shot took a big deflection off the foot of Morrison to divert it past Etheridge.

It was not enough to inspire a Leeds comeback, though, as Cardiff saw the game out in relative comfort to go top of the Sky Bet Championship.