Aden Flint made it four goals in the space of five days by following up his point-saving double at Peterborough with another brace as Cardiff's unbeaten Sky Bet Championship run stretched to four games with a 3-1 triumph over Millwall. 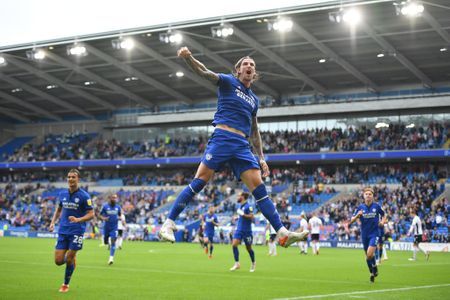 The giant defender broke the deadlock in the 66th minute when he headed home a Ryan Giles free-kick and then converted another Giles cross three minutes later to give his side a two-goal cushion.

Millwall looked dead and buried, but they hit back seven minutes later with a goal from on-loan striker Benik Afobe - his second of the week - and then struck the bar moments later.

What looked like being an uncomfortable final 10 minutes for the home side then took a turn for the better when skipper Sean Morrison rose between two defenders to head home a Marlon Pack long throw and extend the lead.

The Millwall players did not join the home side in taking the knee before kick-off and their fans once again decided to boo the anti-racism stance. The home fans showed their support for the gesture by clapping enthusiastically.

The two teams came into the game having suffered different fates in their midweek fixtures. Millwall had been beaten 2-1 at home by Fulham, while Cardiff escaped with a 2-2 draw at Peterborough courtesy of a 96th-minute goal from Flint.

Scott Malone injected the first bit of pace and threat into the game when he left Morrison sitting on his backside on the left touchline after tricking his way past him before driving into the home box.

It took a last-gasp lunge from the covering Curtis Nelson to help tip the final shot over the bar and away for the first corner of the game in the seventh minute. Millwall were quicker on the break and Malone, George Saville and Jed Wallace were constant schemers for them in the middle of the park.

A great cross from Joe Ralls from the left edge of the box found Kieffer Moore unmarked at the far post, but he could not get the touch to the ball he needed to open the scoring.

Flint then rose highest in the Millwall box to meet a Pack free-kick for yet another foul on Moore, but this time he could not hit the mark with his header.

Millwall's speed in breaking from back to front created a chance for Afobe in the 36th minute and it took another desperate lunge, this time from Morrison, to block the shot.

The first half ended with the best chance of the opening 45 minutes after some nice trickery by Tom Sang on the right edge of the Millwall area.

The Cardiff wing-back's far-post cross was met by Moore, but his header bounced off the top of the crossbar and away to safety.

The game needed a goal and it was Flint who once again turned up with the goods. He was left unmarked at the far post for his first and then rose above everyone else for his second as Giles made an immediate impact with his delivery shortly after coming on as a substitute.

The goal from Afobe, who controlled well on his chest before shooting off the penalty spot through the legs of Flint, added some spice, but Morrison killed things off in the end.