Cardiff sealed a 3-1 comeback win at home to Norwich on Friday night thanks to goals from Joe Ralls, Junior Hoilett and Omar Bogle as they made it a 69th birthday to remember for manager Neil Warnock.

All three home strikes came in the second half as the Bluebirds overturned a 1-0 half-time deficit following Marco Stiepermann's opener for Norwich.

The result moves Warnock's second-placed side to within a point of Sky Bet Championship leaders Wolves ahead of the latter's Sky Live clash at Birmingham on Monday night, while Norwich stay 15th. 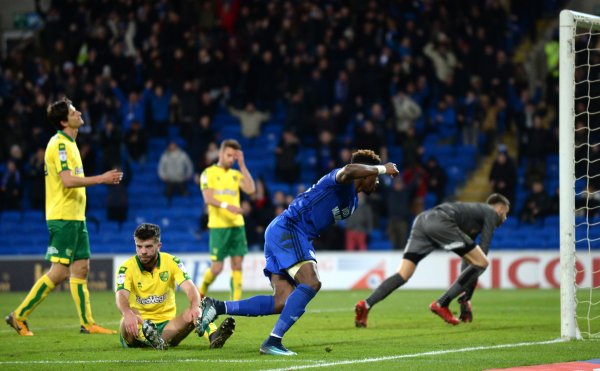 In front of a subdued home crowd, Cardiff had started the better, dominating possession but failing to do much with it. Striker Danny Ward turned inside the box, but could not get a shot away.

Norwich had the best chance of the opening 20 minutes. Wes Hoolahan's free-kick found Grant Hanley unmarked, but the centre-half could only head tamely at Neil Etheridge.

Ward responded by blasting wide from a tight angle and Norwich winger Josh Murphy followed suit as the game became dominated in the middle third of the pitch.

Hoolahan was pulling the strings and when Cardiff failed to fully clear a Norwich corner, Stiepermann drove home. It was a fine finish from the German as his 25-yard strike flew into the net with Etheridge helpless. Nelson Oliveira wasted a fine chance to make it 2-0 before the break, but chose to shoot with the rampaging Hoolahan free outside him.

Cardiff were much better after the break, helped by the half-time introduction of forward duo Lee Tomlin and Bogle. Almost immediately, they were level.

Joe Bennett's corner was headed in by Sol Bamba, but referee Andy Davies had already blown for pushing at the back post to give Cardiff a penalty. Ralls converted the spot-kick to give his team some priceless momentum. All of a sudden, the Bluebirds were dominant.

Bennett rattled the crossbar with a thunderous strike, but it was not long before Cardiff had turned the game on its head.

Loic Damour's shot was blocked, but the ball fell to Hoilett whose floating effort evaded Angus Gunn and flew into the back of the net to send Cardiff City Stadium wild.

There was still time for more drama. Norwich stopper Gunn felled Tomlin and Davies pointed to the spot for the second time only for Ralls to see his penalty saved on this occasion. In the end it made no difference to the overall result as Bogle clipped in late on.