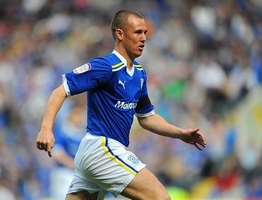 Cardiff made a mockery of Reading's previously outstanding defensive record away from home to win 3-1 and extend their unbeaten run in the npower Championship to three matches.

Reading had only conceded nine goals in 11 games on the road in the league this term prior to kick-off at the Cardiff City Stadium, but three strikes in the first 36 minutes put the game beyond the visiting Royals.

Jobi McAnuff handed the visitors a sniff of a comeback just before the break but, despite having the better of territory and possession in the second period, the Berkshire side could not break through again.

Noel Hunt wasted two good chances for the Royals and McAnuff fired over when well placed as manager Brian McDermott's side lost for the first time in five matches.

And in the end only three good saves from Adam Federici prevented Reading from conceding more in the final 20 minutes.

Cardiff started brightly and were a whisker away from taking the lead in the third minute.

Peter Whittingham skipped away from the Reading midfield and unleashed a shot from the edge of the area which skidded inches wide.

The visitors quickly retaliated, with Noel Hunt seeing his effort following Simon Church's corner blocked en route to goal and Jem Karacan scooping a shot high and wide when the loose ball fell to the midfielder 18 yards out.

But it was the home side who took the advantage through Mason after 13 minutes. The former Plymouth man drove down the right flank, cut inside on to the edge of the box and, after momentarily losing possession, found the time and space to bury the ball beyond Federici.

The goal was only the 10th Reading had conceded away from home in the league this season, but just six minutes later the Royals let in an 11th.

Whittingham delivered a corner from the right and Gunnarsson nodded past Federici.

Cardiff were rampant, as Reading struggled to cope with their hosts' impressive five-man midfield.

A rare foray from the visitors into Bluebirds territory after 26 minutes could only result in McAnuff firing wide of the left-hand post.

And five minutes later the Royals were lucky not find themselves further behind as Joe Ralls sprinted clean through after being played in by Whittingham, but the midfielder tamely shot straight at Federici.

In the end, however, it did not take long for Cardiff to put themselves out of sight.

Miller latched on to Whittingham's pass to finish beyond Federici for his 11th goal of the campaign.

An action-packed first half ended with McAnuff slotting Jimmy Kebe's cross past David Marshall to give Reading hope, and the away side started the second period on the front foot with Hunt shooting wide after neat interplay between the Irishman and Church.

The Royals continued to press Cardiff hard in pursuit of a comeback and Adam Le Fondre's deflected shot looped into Marshall's arms.

But despite their second-half dominance it was their hosts who almost grabbed the fifth goal of a pulsating encounter, with Federici denying Ralls' effort which was destined for the top corner.

McAnuff blazed over from range with 15 minutes left when the Reading skipper should have done better while Federici prevented both Miller and Rudy Gestede from finding the net with exceptional stops late on.