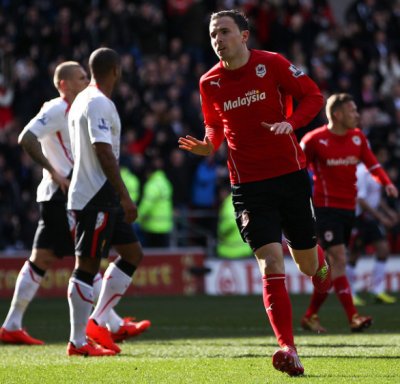 Brendan Rodgers' team went behind on two occasions in the first-half as Jordan Mutch and then Fraizer Campbell struck for relegation-threatened Cardiff.

But Skrtel claimed Liverpool's second equaliser just before the break following Suarez's 16th-minute effort from close range before Cardiff were finished off during a devastating six-minute spell.

Skrtel's 54th-minute header from a corner put Liverpool ahead for the first time, and then an audacious back-heel by Daniel Sturridge gave Suarez all the room he needed to make it six league wins on the bounce.

And Sturridge completed a second-half masterclass when he scored 15 minutes from time to continue Liverpool's irresistible form and keep Cardiff in deep trouble, despite Mutch claiming a consolation goal two minutes from the whistle as Liverpool triumphed 6-3 when Suarez pounced deep in injury time.

Liverpool remain four points behind leaders Chelsea with a game in hand, and Rodgers will breathe a sigh of relief after Cardiff arguably produced their best display during Ole Gunnar Solskjaer's managerial reign.

But when the Reds turned up the heat, Cardiff could not live with their precision passing and quality finishing, meaning they remain in the relegation zone with just seven games left.

Rodgers made just one change from the side that beat Manchester United 3-0 at Old Trafford last weekend, with Philippe Coutinho taking over from Raheem Sterling.

There was further pre-match evidence of discontent among Cardiff fans when supporters staged a peaceful protest against the club's controversial rebrand under owner Vincent Tan from blue to red.

A number of supporters' groups combined to march to Cardiff City Stadium from a nearby pub, with many fans wearing blue inside and outside the ground.

Cardiff dominated the opening exchanges, going close from a free-kick after Liverpool captain Steven Gerrard was cautioned for fouling Campbell, then Kevin Theophile-Catherine blasted over the bar.

But it took Cardiff just nine minutes to open the scoring and Liverpool could have few complaints as Campbell's impressive approach work created space that allowed Mutch to drive the ball home past Simon Mignolet.

Mutch's strike, though, stirred Liverpool into action, and they equalised seven minutes later when Jordan Henderson found Glen Johnson, and his slide-rule delivery was tucked away by Suarez.

Suarez's 26th goal of the season could easily have deflated Cardiff, yet they continued to play with an accuracy and tempo that belied their lowly league status.

And that enterprise was rewarded when Campbell turned Daniel Agger inside out before finishing brilliantly past Mignolet to put Cardiff 2-1 up after 25 minutes of an enthralling contest.

Liverpool tried to assert themselves on proceedings but they had to wait until four minutes before half-time before Cardiff could be punished for a second time.

This time it was Coutinho who played in a telling pass from the left, and Skrtel inched ahead of Cardiff's central defenders to deliver a left-footed finish past goalkeeper David Marshall.

Marshall then had to save at Suarez's feet in the final act of a gripping opening 45 minutes that saw Cardiff make light of trailing Liverpool by 37 points before kick-off.

But Liverpool went ahead nine minutes into the second-half when Skrtel pounced for his second, heading home a Coutinho corner.

Cardiff, though, could feel aggrieved that referee Neil Swarbrick allowed the corner to be taken with Cardiff pair Theophile-Catherine and Mutch both on the touchline waiting to return after receiving treatment for knocks.

It was rough justice on the home team, and Suarez rubbed their noses in the dirt six minutes later with another cool finish following a Sturridge back-heel that set the Uruguayan up.

Suarez returned the compliment by providing the assist for Sturridge to post Liverpool's fifth goal, and while Cardiff hardly deserved such a beating, there was no disguising the fact they had ultimately been crushed by a team oozing confidence, even though there was enough time for Mutch to cut the deficit and Suarez to claim his hat-trick.