Cardiff climbed into the top six of the Sky Bet Championship with a 4-0 victory over Derby as Wayne Rooney suffered the heaviest defeat of his managerial career. 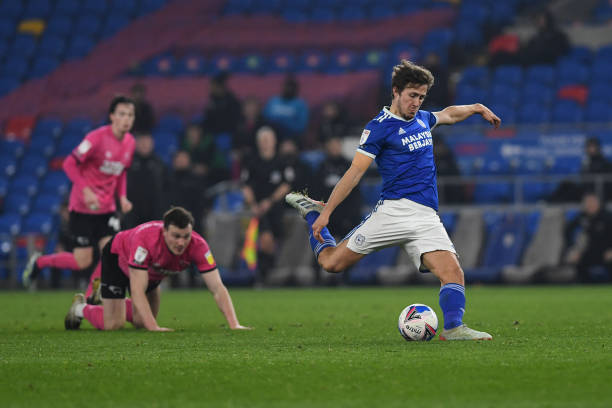 But victory came at a cost as defender Joe Bennett suffered what appears to be a serious injury after 33 minutes.

Bennett was moving towards the ball but unchallenged as he collapsed to the turf, the left-back laying motionless for six minutes before medics took him away on a stretcher.

Derby had headed to the Welsh capital in good form with six wins in nine games easing their relegation worries, but this was a sobering exercise for Rooney whose team were second-best in all areas.

Cardiff gave notice of their intent when Derby struggled to deal with Vaulks' long throw and Moore volleyed over the crossbar from six yards.

Graeme Shinnie quickly tested Dillon Phillips with a low 25-yard shot which the Cardiff goalkeeper pushed around a post, but that was a rare Rams raid on the home goal.

Sheyi Ojo claimed penalty as Matt Clarke appeared to handle while lying prostrate on the floor, and Moore headed Perry Ng's cross inches wide as play was allowed to continue.

But Cardiff's wait for a goal ended after 22 minutes as Bennett slid in Bacuna down the left-hand channel and the midfielder capitalised on a static defending to score his first goal since November 2019.

Moore forced a fingertip save from Kelle Roos before Bennett fell to the turf and was eventually carried away, with concerned faces all around.

Cardiff had further chances before the interval as Roos held an Ojo effort before denying Moore and Bacuna with a double stop deep into time added on for Bennett's injury.

But Derby's defence was breached within three minutes of the restart as Moore met Vaulks' corner to head home his 16th goal of the season, and eighth in 10 games since McCarthy's arrival.

Ojo set up Bacuna's second eight minutes later with a square pass on the edge of the penalty area that the Curacao international curled home left-footed into the corner of the net.

Cardiff were denied when Ojo's celebrations were cut short by an offside flag.

But Vaulks struck a superb fourth in the final seconds, his 30-yard effort flying past Roos to confirm Cardiff's seventh win in eight games and further boost their increasing play-off aspirations.