A Joe Ralls hat-trick sealed a 4-2 victory for Cardiff in an incident-packed encounter with Birmingham, writes Sky Sports

The visitors dominated before Kristian Pederson's early opener but the hosts completed a first-half fightback thanks to Curtis Nelson's first Cardiff goal and Ralls' dubious penalty. 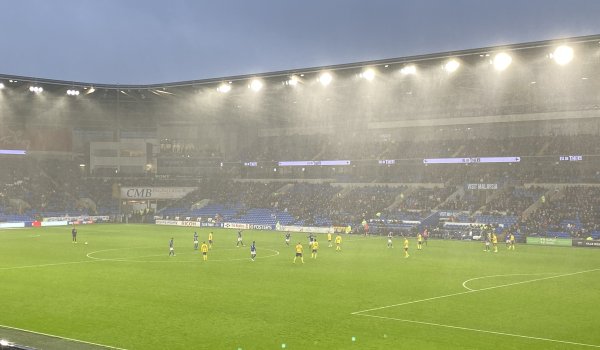 Danny Ward's dismissal opened the door for Birmingham after the Cardiff striker was sent off for a dangerous challenge on Kerim Mrabti, but Ralls completed his brace to take the hosts two goals clear.

Ivan Sunjic's long-range strike gave Pep Clotet's Blues a glimmer of hope, but Ralls secured the three points when he completed his treble from the spot deep into stoppage time.

Cardiff's set-piece vulnerabilities were laid bare in their South Wales derby defeat to Swansea at the Liberty Stadium, and they were once again on show for all to see after only two minutes.

Fran Villalba's searching free kick was met by Lukas Jutkiewicz, who powered a header across goal for the Birmingham players queuing at the back post.

Mrabti somehow failed to get a meaningful contact on the ball from two yards out but Pederson was on hand to bundle into an empty net for an early lead.

Birmingham could have been 3-0 up when they were dealt a harsh blow by referee Andrew Madley after 29 minutes.

As a Ralls corner curled into the area, the referee adjudged Blues captain Harlee Dean to have tugged on Aden Flint's shirt and pointed to the spot.

Ralls stepped up and found the bottom-right corner to draw the Bluebirds level, and they competed an unlikely turnaround 10 minutes later.

Aden Flint powered Marlon Pack's corner straight at Camp, who could only palm the ball back into the danger zone. Nelson failed to provide the finishing touch twice in the six-yard box melee but eventually made a solid contact to steer the ball into the net to crown his first league start with a goal.

The momentum swung back the way of Clotet's side seven minutes after half-time when Ward was shown a straight red card for a crunching studs up challenge on Mrabti.

Instead of sitting in and grinding out a result, Cardiff went on the offensive and their plan paid off after 69 minutes.

Nathaniel Mendez-Laing outmuscled Pederson down the right wing and surged into the box before squaring the ball for Ralls to sweep past Camp and into the far corner.

Sunjic gave the travelling Blues fans a late ray of hope when he picked up the ball 25 yards out and fired a fierce effort into the top corner.

But their hopes evaporated in stoppage time when captain Harlee Dean was the second man to be shown a straight red after elbowing Ralls in an aerial duel.

There was still time for Omar Bogle to be tripped in the box by Marc Roberts to allow Ralls to calmly complete his hat-trick from the penalty spot.