Neil Harris sees his side recover from 2 nil down to earn a point at Charlton in an exciting game in South East London.

Lee Tomlin's 73rd minute goal earned a point for Cardiff in a ding dong battle at The Valley. Tomlin, off the bench for Junior Hoillet just six minutes earlier, produced a quality finish through the legs of Deji Oshilaja and set up a dramtic finale as both sides slugged it out looking for a winner. 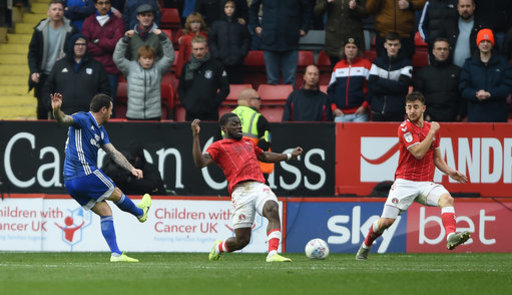 Cardiff had started in control and looked comfortable enough with Nathaniel Mendez-Laing skipping into the box but Callum Paterson wasn't able to hit the target. But the sucker punch came immediately, Charlton replicated the move and they did manage to get the ball into the net from Conor Gallagher.

City looked to wrestle control of the game back but again got hit on the counter, Jonathan Leko showed pace and accuracy as he doubled Charlton's lead.

In between Paterson was tripped in the box and replays show it should have been a penalty and a red card for Oshilaja who caught the Scotsman. But the referee waived it away.

Cardiff changed their approach in the second half and showed more aggression and within minutes did get a penalty. Paterson involved again as he was wrestled by the Charlton defender. Junior Hoilett stepped up with the most least convincing penalty and it was saved easily by Dillon Phillips in the 49th minute (pictured). 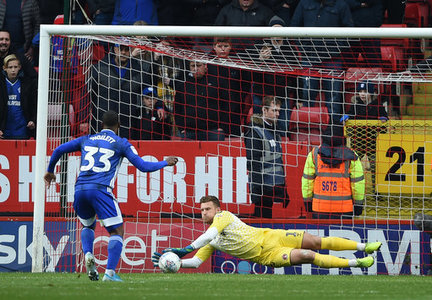 Instead of heads dropping City got the ball forward again straight away and this time did get a break. NM-L's lung busting run won a corner that Charlton failed to deal with. Leandro Bacuna's shot was blocked and the loose ball fell to Mendez-Laing who instinctivly fired the ball into the net from 8 yards.

Gary Madine had his best game (he's not played many) for Cardiff. After being quiet early on he managed to make himself a threat at times and went close with a couple of headers before coming off for Bogle.

Cardiff looked strong and moved the ball around but Charlton's young side had pace and were dangerous whenever they broke. City bodies were put on the line making blocks as Charlton looked to get the two goal advantage back but it was Cardiff who struck next. Joe Bennett overlapped on the left and pulled the ball back to Tomlin who, 17 yards out took a touch, opened up his body and scored into the bottom left hand corner while giving the impression he was going for the top right.

Curtis Nelson was lucky a cheeky kick at a Charlton player wasn't spotted and as both sides went for the winner Omar Bogle failed to connect well enough to his effort as he bore down on goal under pressure from two defenders. At the other end Lee Peltier saved City with his last ditch block in added time.

Delight and frustration for both sides, Charlton because they threw away a two goal lead but a valliant effort from an injury depleted team and for Cardiff the reward of a point after being two goals down, there were signs that can play and at the same time be vulnerable to the counter attack.

A cracking game in the end. Cardiff managed 23 shots at goal and return to CCS on Tuesday to face Stoke City.