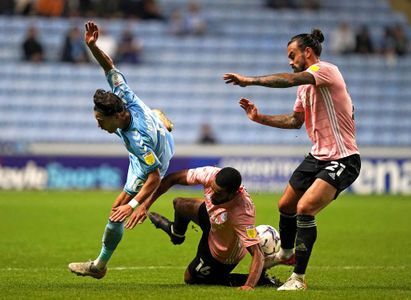 The Swedish forward's fourth goal of the campaign moved the Sky Blues up to fourth in the league and condemned the Bluebirds to their first away defeat of the season.

Fankaty Dabo was shown the first red card of his career as the clock hit 90 for a foul on Marlon Pack.

Coventry boss Mark Robins opted for an unchanged line-up from the 2-0 victory over Middlesbrough on Saturday, meaning Gyokeres and Martyn Waghorn were paid up front for the fourth game running.

The Bluebirds' star striker was in the action early on when he almost latched onto a long throw but a good punch from Simon Moore prevented the Wales international from getting his head to it.

Gustavo Hamer had the home side's first effort on goal when his free-kick and follow-up were both blocked by the wall before Gyokeres' superb strike came after just 15 minutes.

Jamie Allen's ball forward was helped on by Callum O'Hare and sent the former Brighton man through on goal.

He honed in on Dillon Phillips with two Cardiff defenders bearing down but it wasn't enough to stop the 23-year-old from curling his effort into the bottom corner from outside the box.

Cardiff enjoyed a spell of possession after the goal without creating any meaningful chances but were carved open numerous times on the counter attack.

Firstly it was O'Hare whose shot was blocked after a neat one-two with Dabo down the right while Dom Hyam should have done better when he met Waghorn's corner.

McCarthy was visibly showing his displeasure at his team's performance before the break, prompting him to haul off Colwill and Mark Harris at half-time in place of the benched Bowen and Collins.

The move bred confidence in the visitors and Will Vaulks fired against a Coventry defender from outside the box early in the second half while O'Hare's shot at the other end was comfortable for Phillips.

The Welsh outfit's strong spell should have seen them equalise through Joel Bagan and Collins.

But Coventry continued to carry a threat at the other end and secured a deserved fourth win back in their home City despite Dabo's late red card, dismissed by referee Michael Salisbury after a poor tackle on Pack.