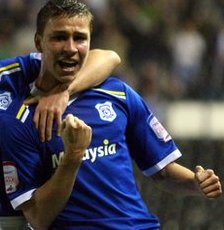 Filip Kiss (right) scored his first goal for Cardiff in a convincing 3-0 victory over lacklustre Derby which moved the Welsh club into the npower Championship play-off places.

The Rams' unbeaten run of four home games was ended with aplomb by a vigorous Bluebirds performance, Slovakian Kiss opening the scoring in the first half.

The second half saw Kevin Kilbane turn the ball into his own net and Peter Whittingham slot home a regulation third as Cardiff produced their first away win since the opening day of the season.

Cardiff struggled to assert any authority in the opening stages and their blushes were spared when an unmarked Jason Shackell failed to connect with Ben Davies's dangerous free-kick.

But against the initial run of play, the visitors went ahead in the 20th minute and did not look back.

Ben Turner teased a ball across the Derby backline to Kiss, who dug out a dipping drive to beat Frank Fielding at his near post.

Craig Conway might have doubled the advantage immediately when Kenny Miller dummied the ball into his path, but Fielding was on hand to smother the shot.

The Rams tried to respond through Jamie Ward, but the winger's shot was saved by David Marshall.

Right-back Russell Anderson was then forced off after 30 minutes through injury, with Jake Buxton his replacement.

But the visitors also suffered an injury blow of their own when Marshall failed to re-emerge after the break following a first-half knock. Tom Heaton took his place.

Cardiff were first to threaten after the interval as Aron Gunnarsson launched a dipping drive from distance that rippled the top of Fielding's net, before Conway slammed a snapshot across the goalmouth and wide.

Turner arrived to head into Fielding's hands and Whittingham saw his powerful shot blocked by Jeff Hendrick before the hour mark as the home team retreated further into their shells.

A rare foray forward saw a good chance wasted, Shackell rising to meet Davies's corner but nodding agonisingly over the crossbar, and the sucker punch arrived in the 61st minute.

Whittingham whipped in a regulation corner which a disorientated Kilbane headed into the roof of his own net.

Nigel Clough then withdrew 15-year-old striker Mason Bennett, who was making only his second senior start. His replacement Callum Ball's first act was a left-footed drive that dipped just over Heaton's crossbar.

However, it was too little too late and in the 73rd minute Kiss supplied Whittingham just inside the area for the ex-Birmingham man to fire home with ease.

Hendrick tried a speculative drive, blocked by Gunnarsson, as Derby sought a consolation goal in the final 10 minutes.

Substitute Tomasz Cywka gave Heaton something to do with a pacy effort five minutes from time, but the battle was lost