Opening day blues as Cardiff lose at Wigan despite leading at half time.

It was all going so well after 55 mins. Cardiff were a goal up thanks to Joe Ralls' strike into the middle of the goal after David Marshall firstly fumbled a shot from distance before flapping at Gary Madine's cross, the ball falling invitingly for Ralls to smash it home.

Wigan missed a penalty early in the second half and it was looking like it might be Cardiff's day. 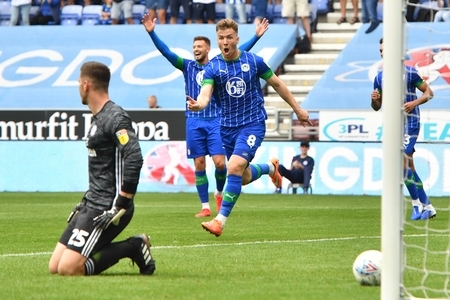 Neither side had impressed up until then but it all changed in the 56th minute.

Neil Etheridge pulled up with what appears to have been a hamstring injury with Joe Day coming on for his debut. Day's first touch was to pick the ball out of the net. A Wigan free kick was deflected off the wall and Michael Jacobs reacted quickest to score. City defenders like statues.

Minutes later and Wigan attack, fast fluid passing and without City getting in a challenge the ball was in the back of the net through Josh Windass.

Omar Bogle came off the bench and soon levelled. He took up a great position in the box to volley in Bobby Reid's cross.

But the goal of the game came from Lee Evans who curled an effort into the top right hand corner after Cardiff again failed to close down and challenge. It turned out to be the winning goal and despite Cardiff piling on late pressure Marshall's goal held firm. Wigan almost extended their lead but Day made a good save.