Babel struck a first-time curling effort from 25 yards which gave Neil Etheridge no chance to settle a game of little quality at Craven Cottage.

The Dutchman's moment of magic proved a rare bright spark for either side, with Cardiff lacking the intensity expected from Neil Warnock's side, who badly needed a win to keep themselves on Brighton's tail, and an eight-minute, first-half stoppage after Denis Odoi was knocked unconscious did little to aid the tempo.

However, having failed to force a save of note out of Fulham goalkeeper Sergio Rico until the final five minutes, when Sean Morrison and Danny Ward both went close, they are now four points adrift of safety with two games remaining after Brighton drew 1-1 with Newcastle, and realistically needing to win both of their final two games against Crystal Palace and Manchester United. 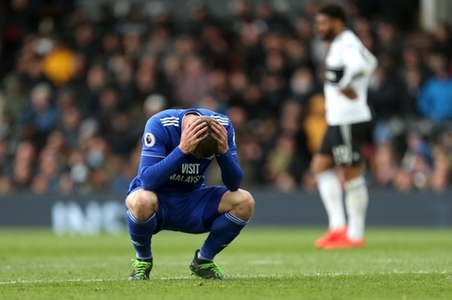 With Fulham enjoying fine wins over Everton and Bournemouth in their last two outings and Cardiff desperate for three points, the scrappy, slow first half which developed may have surprised both benches.

It took 12 minutes for either 'keeper to make a save, when Aleksandar Mitrovic's 20-yard shot on the turn was kept out at full-stretch by Etheridge.

Odoi was hurt when Maxime Le Marchand's boot struck him in the chest and knocked him clean out midway through the first half, with the defender carried from the pitch with his neck in a support following a lengthy stoppage, after which Fulham continued on the front foot.

Whatever words Warnock had for his players at half-time did little to knock some life into them, with Rico a passenger before the break and similarly untroubled once the second half got under way.

Four minutes into the second 45, Mitrovic should have scored when Tom Cairney, cutting in from the right, showed excellent composure to pick him out unmarked, but the striker turned his low pass well over from 15 yards.

The game continued with the same attritional approach from before the break, until 11 minutes from time when Babel stepped up to finally inject some quality.

Ryan Christie made a superb 40-yard run out of defence and laid the ball back for the Dutchman, who curled a shot from the right channel away from Etheridge and into the far corner.

Late on Morrison and Ward both turned crosses goalwards but made life too easy for Rico, who saved both comfortably, and he was again able to hold on to the ball when Morrison nodded a glorious chance straight into his hands in the final seconds.