Danny Ward was sent off as Huddersfield lost 3-0 against Cardiff to go into the play-offs on the back of successive defeats.

Wales goalkeeper Ward, on loan from Liverpool, saw red for handball outside the box in the first half and faces a ban.

By that point, Kenneth Zohore had already struck for Cardiff, and with the extra man he set up two more for Joe Bennett.

Town, with their play-off place secured, fielded a strong side but were never in the game 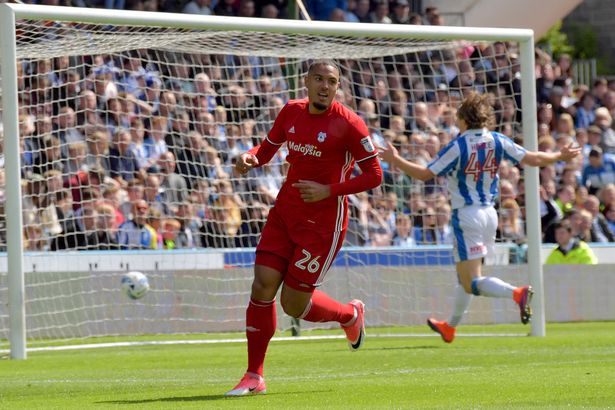 The defeat leaves them fifth in the table, setting up a play-off semi-final against Yorkshire rivals Sheffield Wednesday.

Huddersfield coach David Wagner had come in for criticism after making 10 changes for the 2-0 defeat at Birmingham last week - with the Football League asking for his observations on his team selection - and he raised more eyebrows by making nine changes here, with only Tommy Smith and Collin Quaner keeping their places.

But restoring several regulars did not have the desired effect as Cardiff looked the more motivated from the start and went ahead in the seventh minute.

A quick breakaway move saw Anthony Pilkington play the ball through the middle for Zohore to accelerate away and draw Ward before slotting the ball into the far corner.

Cardiff continued to press and Aron Gunnarsson forced Ward into a save with Bennett and Pilkington ready to pounce.

Chris Lowe's great ball over the top set up Izzy Brown who was unmarked in the box but the on-loan Chelsea star could not keep his feet and his finish lacked power.

The home side suffered a major blow in the 20th minute when Ward was sent off.

The keeper came way out of his box to challenge Junior Hoilett but appeared to handle the ball as he slid in.

Substitute goalkeeper Joe Coelman came off the bench, but nine minutes later he was picking the ball out of the net as Cardiff went 2-0 up.

Zohore turned creator this time, squaring the ball from the left for Bennett to fire home first time, high into the net giving Coleman no chance.

Huddersfield should have pulled a goal back a minute before the break when Quaner was on the end of a Brown cross but keeper Brian Murphy got enough on the striker's finish to deflect it wide.

Zohore, who signed an extended contract at the end of April, set up Hoilett who curled just over.

He beat Lowe and crossed for Bennett to fire past Coleman and send Huddersfield into the play-offs on a downer.

Subs not used: Amos, Halford, Noone