Huddersfield staged a dramatic late comeback to beat Cardiff City and close the gap on the Championship's automatic promotion places to two points. 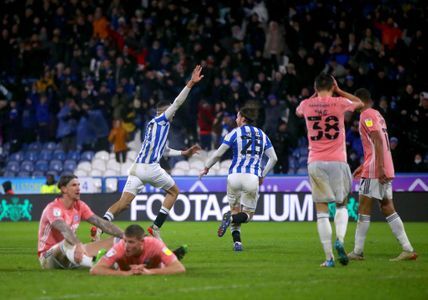 For much of the second half, it looked like Carlos Corberan's side were heading for a first defeat since November.

But their late revival means the Yorkshire club are now unbeaten in 16 games in all competitions and up to fourth place in the table, two points adrift of Bournemouth in second.

As for Cardiff, this was an agonising way to lose after a creditable performance looked set to secure a fifth win from seven.

Defeat, however, means the Bluebirds remain 19th, albeit still 15 points clear of the relegation zone.

Steve Morison's first win as Cardiff manager came against Huddersfield in November and it looked like his side were on course for a memorable double as they executed their gameplan for much of this encounter.

Although Huddersfield controlled possession in the early exchanges, the visitors created the first chance as defender Mark McGuinness' powerful header forced goalkeeper Lee Nicholls into a save.

Former Cardiff striker Danny Ward was the first to threaten for the Terriers but, for all their dominance of the ball, it was their opponents who looked more incisive on the break.

Cody Drameh stole possession on halfway, surged forward at pace and saw his shot blocked, before Doyle's follow-up was pushed away by Nicholls.

Nicholls then twice denied Jordan Hugill and, although Huddersfield started the second half with more urgency, the visitors converted in the 61st minute.

Hugill played his part by controlling the ball well and playing it into the path of Doyle, who strode into the penalty area and lifted a fine finish over Nicholls.

Huddersfield's initial efforts to find an equaliser were hurried until Koroma found himself unmarked in the box and drilled a low shot beyond former Town keeper Alex Smithies.

Then in the sixth of nine minutes of added time, Russell coolly finished into the bottom corner for his first Huddersfield goal - and one which could prove precious in their bid to return to the Premier League.