Huddersfield, without a Premier League point before the game and Cardiff without a goal, largely cancelled each other out in a game that was low in quality and lacking in chances.

Hogg's sending off after 63 minutes resulted in Cardiff taking a grip of the game and they should have won it as Sean Morrison missed a gilt-edged chance with a header late on.

Ultimately, it was a result that will suit neither side as Huddersfield remain in the relegation zone, while Cardiff's search for a Premier League goal continues. 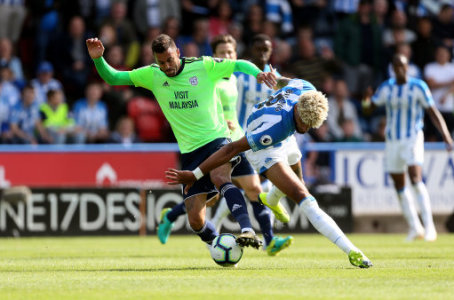 With just five minutes played, both teams were forced into an early substitution. Nathaniel Mendez-Laing had done brilliantly to flick the ball over Christopher Schindler and then around Mathias Jorgensen but with the ball racing away from him, he slid in to shoot with the onrushing Ben Hamer blocking the effort before colliding into him.

Both received treatment for their injuries with Mendez-Laing being stretchered off and Hamer following him a couple of minutes later after failing to shake off his knock. Callum Paterson replaced Mendez-Laing and Jonas Lossl came on for Hamer.

The half-time whistle was a welcome interruption to a game that produced no shots on target in the opening 45 minutes. Harry Arter ended that particular drought after 51 minutes, drawing a comfortable save from substitute goalkeeper Lossl, before Steve Mounie forced a good stop from Neil Etheridge with a thumping header at the other end moments later.

With 63 minutes played, Huddersfield were reduced to 10 men. Arter and Hogg tussled inside the area from a Cardiff corner and the former's pleas for a penalty irked the Huddersfield captain who forcefully pulled him back up from the turf. The pair then squared up to each other before Hogg appeared to aim a headbutt in Arter's direction. Following a lengthy discussion with his assistant referee, Michael Oliver sent Hogg off and produced a yellow for Arter. 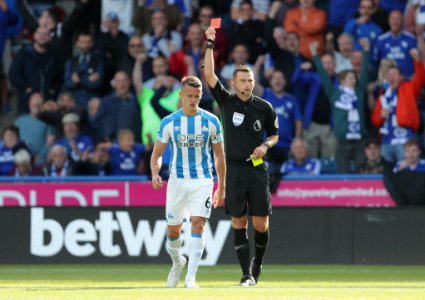 With an extra man advantage, Cardiff began to dictate the game and Neil Warnock threw on two strikers - Danny Ward and Bobby Reid - in search of a winner. It was almost a centre-back who provided it, though, as Morrison rose above Lossl to meet a Joe Ralls corner inside the six-yard-box but he somehow nodded it just wide with the goal gaping.

In the final minutes, all three of Cardiff's substitutes combined for a chance as Ward teed up Paterson whose cross was diverted agonisingly wide of the far post from Reid's deflected effort.

After soaking up sustained Cardiff pressure for the final 20 minutes, Huddersfield nearly nicked it themselves, as Terence Kongolo burst forward before whipping a dangerous cross into the box and Sol Bamba just about managed to avoid scoring an own goal as he bundled the ball out for a corner and away from Laurent Depoitre.

The Dutchman has tended to play as a centre-back for Huddersfield but he showed invention in the final third at left-back, plundering a well-struck shot into the side netting in the first half before jinking past Calum Paterson with an excellent run in the second.

He almost capped a promising performance with an assist late on as he galloped the length of the pitch before sending in a peach of a cross that was almost turned into his own net by Sol Bamba.