Cardiff gave their Sky Bet Championship play-off hopes a welcome push in the right direction with a superb 3-0 away win at relegation-threatened Huddersfield.

First-half goals from Josh Murphy and Will Vaulks did the bulk of the damage as the Bluebirds sparkled at the John Smith's Stadium and climbed two places in the standings to maintain the pace on the leading pack. 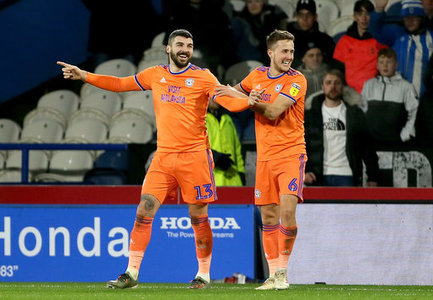 And Callum Paterson bagged a 69th-minute third to put the contest out of reach as Neil Harris' confident side extended their impressive league run to just one defeat from their last 11 matches.

And then five minutes later fellow midfielder Vaulks volleyed home from a corner as the shell-shocked Terriers were left with plenty of work to do.

It was Wales international midfielder Vaulks' second league goal of the season and one which gave the visitors welcome breathing space.

And despite the Terriers' best efforts after the break, it was Paterson who made sure of three welcome points in a fine win on their travels for the Welshmen.

Playmaker Juninho Bacuna rifled wide as early as the second minute and not long after Elias Kachunga had a shot charged down as the hosts started with purpose.

Kachunga whipped in a lovely chipped cross in the 20th minute but Bacuna headed straight at Cardiff keeper Alex Smithies.

The former Huddersfield goalkeeper then produced a superb save at his near post to block Bacuna's powerful drive.

But it was the visitors who took the lead against the run of play with their first attack of the match.

The Bluebirds beat the offside trap, Lee Tomlin's pass set Murphy free and he chipped a shot past the onrushing keeper Jonas Lossl for his first league goal for over just over five months.

French striker Steve Mounie lashed just wide with a half-volley as the home side looked to get back on level terms.

However, the hosts were hit with a sucker punch when Vaulks doubled the visitors' lead with an unstoppable right-foot volley.

Poor defending allowed the midfielder to race on to Marlon Pack's corner and fire superbly into the bottom left corner.

Tomlin should have put the contest out of reach six minutes before the break, but midfielder Lewis O'Brien raced back to make a superb last-ditch tackle to avert the danger.

Albert Adomah tried his luck from distance and Everton loanee Lossl made a meal of the save, unconvincingly palming it wide for a corner.

Bacuna had a shot deflected wide just before the break but Huddersfield were all at sea as they failed to make their early dominance in possession pay.

O'Brien had a shot blocked on the edge of the box as Danny Cowley's charges started brightly following the resumption.

Arsenal loanee Emile Smith Rowe made a nuisance of himself but shot straight at Bluebirds goalkeeper Smithies as the home side remained frustrated in front of goal.

Cowley made a double change by introducing striker Fraizer Campbell and on-loan Andy King, but the Terriers could not catch a break.

And immediately Town had a huge penalty appeal turned down by referee Darren England after King's shot struck the right hand of Curtis Nelson in the Bluebirds box.

But Scotland forward Paterson kept his cool after Junior Hoilett and Tomlin had seen efforts blocked to fire home for his fourth goal in his last five games.