Cardiff regained pole position in the race to clinch the second automatic promotion spot in the Sky Bet Championship with a 2-0 victory over Hull at the KCOM Stadium, writes PA Sport.

Fulham's come-from-behind win over Sunderland on Friday night had put the pressure on the Bluebirds, but the Welsh side moved back up to second spot courtesy of captain Sean Morrison's double. 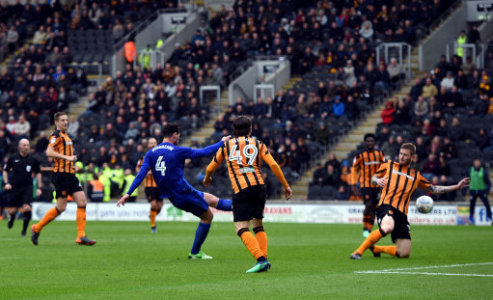 It was far from a vintage display from Neil Warnock's team but they did what was required in an attritional contest to reclaim their one-point lead over the Cottagers ahead of the regular-season finale next weekend.

Hull had scored 14 goals in their last four matches and drew 5-5 at Bristol City last weekend but, despite some decent pressure, they did not force Cardiff goalkeeper Neil Etheridge into a save.

That incredible stalemate at Ashton Gate guaranteed their survival and they were playing merely for pride in their final home game of a forgettable season, but they ran into a far more clinical side on Saturday.

Both sides were forced into a change before a quarter of an hour had passed, with Cardiff midfielder Aron Gunnarsson limping off to be replaced by Marko Grujic and Hull defender Angus MacDonald making way for Ondrej Mazuch after appearing to land awkwardly.

It was Hull who fashioned the first meaningful opportunity as Stephen Kingsley's inviting low cross found Fraizer Campbell, but the former Cardiff striker's shot was well blocked by Sol Bamba.

However, chances were in short supply in a scrappy opening half hour as Cardiff, in particular, struggled to fashion an opening.

But they went ahead with their first effort on target in the 32nd minute as Morrison rose highest to power home a header from Joe Ralls' inswinging corner.

Eight minutes were added on at the end of the first half because of the lengthy earlier stoppages in play and Cardiff went close to doubling their lead in that time as Junior Hoilett's drive was beaten away by Allan McGregor, who then gathered the forward's follow-up header.

The Hull goalkeeper has been heavily linked with a return to Rangers this week and showed why he is in demand by keeping out an unmarked Callum Paterson's header at the start of the second half.

Cardiff seemed content to sit on their one-goal advantage thereafter although Kenneth Zohore tested McGregor from just outside the area.

Hull then broke down the other end and there was much frustration when referee Andy Davies was unmoved after Campbell went down in the area after a full-blooded challenge from Morrison.

With rain steadily falling and Hull pressing for an equaliser, Cardiff countered brilliantly to all but guarantee the important three points 10 minutes from time.

Nathaniel Mendez-Laing burst downfield before teeing up a free Morrison, who made no mistake in slotting past a helpless McGregor to the delight of a sizeable travelling contingent.

That seemed to settle Cardiff and they could have added further gloss to the scoreline, with Zohore shooting wide after rounding McGregor.