Saturday's embarrassing FA Cup exit to Sky Bet League 1 strugglers Shrewsbury had reportedly left the Bluebirds boss on the brink, with online polls showing many fans want a new manager to be installed.

The pressure on Slade will only increase after an uninspiring display at promotion-chasing Hull, who usurped Derby with a win more comfortable than the 2-0 scoreline suggests. 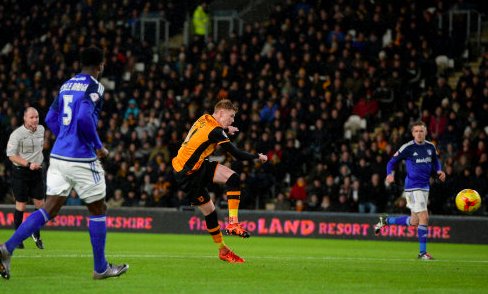 It was a 10th home win of the season for Steve Bruce's men and a result that always looked likely after Anthony Pilkington clipped over Cardiff's best chance midway through the first half.

Hernandez's penalty five minutes before the break give Hull an advantage they would not relinquish, with Clucas volleying home the hosts' second shortly after the restart to wrap up victory.

It was meek response to the 1-0 home loss to Shrewsbury and a result that looked likely once Hull found their feet, with Bruno Ecuele Manga denying the dilly-dallying Hernandez an early opener.

David Marshall should have been tested at the very least and the same went for Mo Diame shortly afterwards, with his curling effort flying well over the Cardiff goal.

A wonderfully-weighted ball from Craig Noone put Pilkington through on goal and the winger's clipped effort rippled the net, only for it to quickly dawn on the travelling support it had landed on top of the goal.

It was a great chance that Slade's men were made to rue five minutes before half-time, when Lee Peltier wrestled Harry Maguire to the ground from a corner.

Hull's lead never looked in danger from that point onwards and Marshall did well to prevent man-of-the-match Maguire scoring an unlikely effort at the far post shortly after half-time.

Clucas' free-kick created that danger and the winger himself soon added Hull's second, keeping composed after his initial effort ballooned off a defender to volley home low past Marshall.

Pilkington and Joe Ralls had efforts on rare voyages forward as Cardiff attempted to peg back Bruce's men, but nearly went further behind when Diame and Hernandez linked up.

Marshall did well to deny Clucas when Hull next attacked and substitute Tom Huddlestone twice tried his luck from distance.

Marshall again denied Clucas in stoppage time and prevented David Meyler making it three with the last effort of the evening.