Fraizer Campbell put the visitors ahead but Nick Proschwitz and Paul McShane looked to have won it for Hull before Proschwitz missed a late penalty.

Champions Cardiff, who had Andrew Taylor sent off, then equalised through Nicky Maynard's stoppage-time penalty.

The final whistle blew with Hull unsure of promotion but Watford's 2-1 defeat by Leeds meant the Tigers were up.

Thousands of fans flooded onto the pitch at the KC Stadium as the match ended, but celebrations were put on ice as Watford's game had been delayed because of a serious injury to goalkeeper Jonathan Bond. 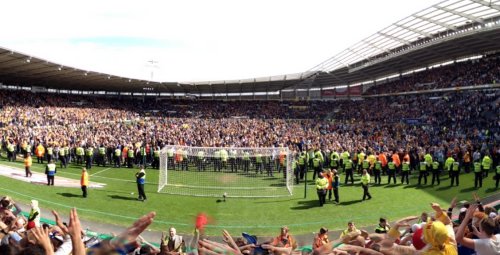 The Hornets - who would have pipped Hull to promotion if they had bettered the Tigers' result - were drawing 1-1 when Hull's game finished, and knew that a goal would send them up.

But Leeds' late strike, and then the final whistle at Vicarage Road - a full 16 minutes after the end of the Hull game - was greeted with a huge roar by the thousands of Tigers supporters who had stayed behind.

Hull, relegated from the Premier League in 2010, had gone into the game without a win or a goal in their previous three matches.

Their second-placed finish means that Steve Bruce, who replaced Nicky Barmby as manager last June, has now earned promotion to the Premier League on three occasions.

It was Malky Mackay's Bluebirds, already assured of the Championship title, who went closest to an early goal when Craig Conway moved in from the left-hand side and his effort took a slight deflection to drift just past the far post.

The Tigers were looking bright with Sunderland loanee Ahmed Elmohamady heavily involved in much of their attacking play.

George Boyd flicked Stephen Quinn's pass into the path of Robbie Brady, but the Republic of Ireland man put his effort high and wide.

With the game beginning to open up, both teams had chances from distance before the break, David Stockdale getting down well to a Jordan Mutch effort and Cardiff's David Marshall parrying Brady's shot.

The news the home fans craved from 200 miles away came just before half-time with Leeds taking the lead at Watford.

But the injury delay at Vicarage Road meant that the Hornets had levelled by the time the second half got underway in Hull, and anxiety amongst City fans quickly grew.

Former Hull striker Campbell, on as a half-time substitute, made a clever run between the two home centre-backs and applied an assured 49th minute finish.

Hull looked for an immediate response and levelled through Proschwitz from Stephen Quinn's centre.

The Tigers were beginning to play with greater confidence and McShane met a corner from the influential Robbie Brady to give them a deserved 63rd minute lead.

Cardiff were reduced to 10 men when Taylor was shown a second yellow card in the dying minutes, and Proschwitz had the chance to seal it from the spot after David Meyler was felled in the area but Marshall saved his spot-kick.

In a dramatic finale, the Bluebirds were awarded a penalty of their own after a handball in the area.

Maynard confidently despatched it to leave the home fans anxiously waiting for the final whistle at Watford, but the draw proved to be enough as Leeds' late goal sparked wild celebrations.