The striker almost collapsed onto the ball before prodding in after 65 minutes as Neil Warnock's second-placed side boosted their promotion prospects. 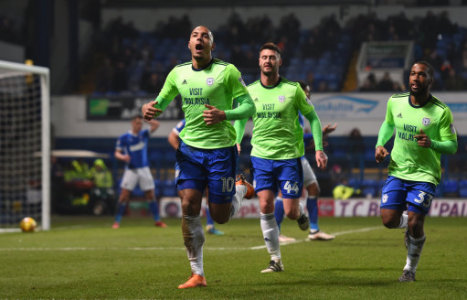 Ipswich had plenty of the play but could not find a response after sliding behind and they remain lodged in mid-table. The visitors forced a corner in the first minute of the game and the delivery from Joe Ralls fell to Matthew Connolly whose shot went just past the left-hand post.

Ipswich pressed forward and in the 14th minute neat interplay between Luke Hyam, Grant Ward and Bersant Celina led to a crossfield ball which Jordan Spence just failed to make clean contact with.

The hosts' first corner arrived in the 26th minute which was headed wide by Adam Webster. Two minutes later, the ball was fired up-field for Sears to chase and he laid the ball off for Ward, whose 25-yard shot was pushed wide by Neil Etheridge.

A free-kick by Luke Chambers in the 36th minute was played wide to Jonas Knudsen whose pass to Hyam was blocked in the penalty area and then a shot from Sears from just inside the box was deflected wide for a corner.

Ipswich were on top and another corner was headed goalwards by Spence, but Joe Ralls was on the goal line to head clear.

The Tractor Boys won a corner in the second minute of the restart which was taken by Celina and found the head of Webster, who sent the ball just over the bar from inside the six-yard box.

Webster fouled Junior Hoilett 35 yards from goal as the Welsh side tried to exert some pressure on a solid-looking Ipswich defence in the 58th minute, and a cross from Hoilett three minutes later found Zohore whose goalbound shot was blocked.

Cardiff took the lead seven minutes later in bizarre fashion when a free-kick by Ralls found Zohore. The striker fell when trying to connect with the ball but managed to get back to his feet and find the left corner, beating Bartosz Bialkowski.

Four minutes later, Hoilett found Zohore unmarked in the penalty area and he headed just over the bar as the visitors gained control of the game.