Gaetano Berardi was sent off as Leeds slipped to a humiliating 4-1 home defeat to Cardiff.

Three first-half goals from Callum Paterson, Junior Hoilett and Sean Morrison did the damage at Elland Road as the on-song Bluebirds continued their quest for automatic promotion from the Sky Bet Championship. 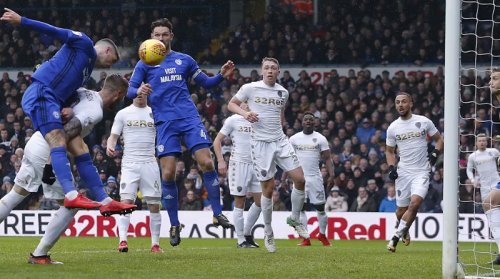 Souleymane Bamba put through his own net to get the hosts on the board after the break, but Thomas Christiansen's side struggled to mount a serious comeback after going down to 10 men and Anthony Pilkington wrapped things up with a fourth goal two minutes from time.

The result was Cardiff's third straight win against Leeds, and meant they extended their undefeated league run to five games after four successive defeats.

Leeds, on the other hand, have gone seven games without a win in all competitions, with their last victory coming on Boxing Day.

It was Berardi's second red card of the season, with five of his six career dismissals coming since the Swiss defender joined Leeds in 2014.

Paterson set the tone when he raced into the box after nine minutes and belted home deadline-day signing Armand Traore's cross.

Down the other end Neil Etheridge denied the hosts a quick equaliser by tipping Pierre-Michel Lasogga's strike onto the woodwork.

Hamburg loanee Lasogga was again left frustrated when he left the crossbar rattling soon afterwards, before Ezgjan Alioski put the rebound wide with the goal at his mercy.

Hoilett made it two, reaching double figures for the campaign, as Paterson turned provider by leaving the former QPR man an easy finish.

Berardi's game ended in first-half stoppage time after a poor challenge on £6m man Gary Madine. And a minute later Morrison headed home the third from Hoilett's free-kick to give the visitors a deserved cushion.

Nine minutes after the restart Bamba turned Stuart Dallas' cross in to his own net to give the Leeds faithful something to cheer about.

Leeds midfielder Pablo Hernandez put an audacious free-kick effort over the bar as the hosts tried to fight their way back in to the contest after the restart.

Paterson almost added another for Cardiff but blasted just wide of the target. Pilkington tapped home Paterson's drilled cross to rub salt in to the gaping Leeds wounds. In stoppage time Alioski fired over more in anger than in any real attempt on goal.