The game looked to be heading for a goalless draw when the Real Betis loanee curled home from just outside the area in the 92nd minute, giving Cardiff their first three points on the road.

Leicester had a penalty saved in the 75th minute, with James Maddison - who was tugged back by Sean Morrison - seeing his spot-kick pushed away by Neil Etheridge (pictured) before Sol Bamba helped clear the rebound. 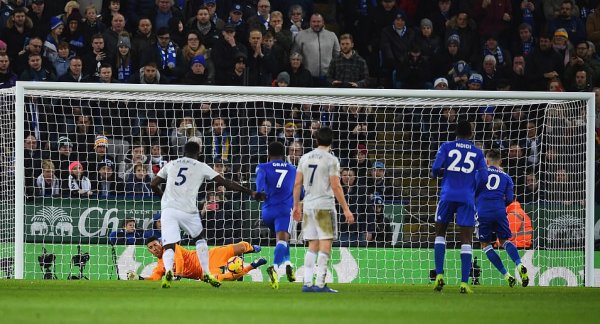 Cardiff have now moved up a place into 16th - two places and four points ahead of the drop zone - while Leicester drop a place into eighth.

It was nearly a terrible start for Cardiff as Greg Cunningham went close to scoring an own goal inside six minutes. Demarai Gray slipped the ball through for Marc Albrighton, with Cunningham getting ahead of the latter. However, his touch back to Etheridge was heavy, missing the goalkeeper and just trickled past the far post.

Not long after and Maddison went close. He rounded Aron Gunnarsson and Harry Arter in the middle of the park before driving towards goal. With five goals so far this season, he tried his luck, and forced Etheridge to tip it around the post.

The Cardiff goalkeeper was the busier of the two in the first half, and made two fine saves in quick succession. Ricardo Pereira scored a stunning goal against Man City on Boxing Day and went close again in the 27th minute, but Etheridge leapt to keep it out. Not long after, Maddison tested him with a curling free-kick but he was once again there to deny him.

The second half began in the same vein with Etheridge keeping Leicester at bay. Just minutes after the restart, the goalkeeper got down low to stop a shot from Pereira before Cardiff nearly scored in their own net once again. Gray fired in a cross from the left flank and Morrison got there ahead of any Leicester players to see it away, although could well have diverted it past Etheridge.

Cardiff tested Kasper Schmeichel for the first time in the 67th minute. Caglar Soyuncu's mistake allowed Josh Murphy to burst forward before striking, but the Leicester goalkeeper got down low to save. Not long after, Junior Hoilett struck, but his effort pinged off the foot of Harry Maguire before Murphy put the rebound wide.

Leicester were awarded a penalty in the 74th minute after Morrison tugged the shoulder of Maddison and sent him to ground. With Jamie Vardy substituted not long before, Maddison took the penalty, but Etheridge went the right way to save before Bamba managed to get the ball away from the feet of Maddison - who was poised to strike - with a superb clearance.

Cardiff then snatched the victory in the second minute of four added on. Rachid Ghezzal was dispossessed by Arter on the left-hand side, with the Cardiff midfielder picking out Bobby Reid in the area. He then cut it back for the waiting and unmarked Camarasa, who curled home a wonderful strike into the top far corner to give the visitors their first away win of the Premier League season.