Arsenal's win over Burnley guaranteed United would be unable to finish fifth regardless of the scoreline at Old Trafford, but they put in a grimly familiar performance devoid of the intensity, passion or quality required, albeit also lacking luck against a Cardiff side handed a slice of fortune from referee John Moss in opening the scoring.

Cardiff winger Mendez-Laing received the slightest of touches from Diogo Dalot's sliding challenge to go down in the area, before picking himself up to beat David De Gea from the spot (23). 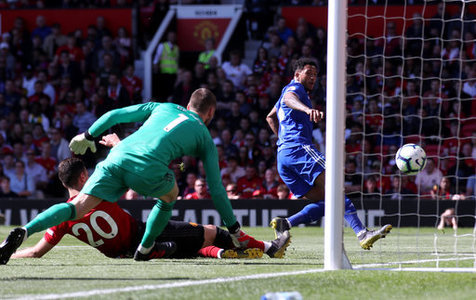 Striker Mason Greenwood, United's youngest starter in Premier League history, had a number of chances and was inches from scoring when Neil Etheridge turned his close-range effort onto the post, but his bright performance was one of few plus points from a miserable afternoon at Old Trafford.

They had other chances to level but could not honestly say they were better than 18th-placed Cardiff, the first relegated side to beat a top-six team this season.

And the visitors' second summed up United's season, with some calamitous defending allowing Mendez-Laing to slot in unmarked after half time and double an advantage Cardiff would hold comfortably.

The excitement for Greenwood's full debut was nearly rewarded when his early header was kept out by Etheridge, and the 17-year-old went closer still to the perfect start when his shot was brilliantly turned onto the post by the goalkeeper soon after

But United, as they have so often this season, drifted from a bright start and let the game ebb and flow around them. Cardiff were already knocking on the door when Moss gave them a glorious chance to open the scoring. The referee harshly adjudged Dalot's brush on Mendez-Laing constituted a foul and awarded a penalty, which the winger duly dispatched.

Cardiff gladly took the momentum to end the half the stronger side, but there was always a chance a half-time team talk from Ole Gunnar Solskjaer would see to that.

But after a momentary improvement, United crumpled under the slightest pressure. A throw-in from the right caught out stand-in centre-back Scott McTominay, who was busy wrestling Bobby Reid, allowing Josh Murphy a clean run into the area where he squared for Mendez-Laing to tap in.

The spirit of United's homegrown talent still shone through, but there was little else to encourage the hosts that there was any hope of a comeback, and bar one late turn and shot from Marcus Rashford, they never threatened one.

Reid could have put the icing on the cake for Cardiff at the other end, catching the United defence cold when latching on to a long ball forward, and while he bent the ball just wide of De Gea's post, he was still smiling at full time after Cardiff signed off from an ultimately disappointing season in sensational fashion.