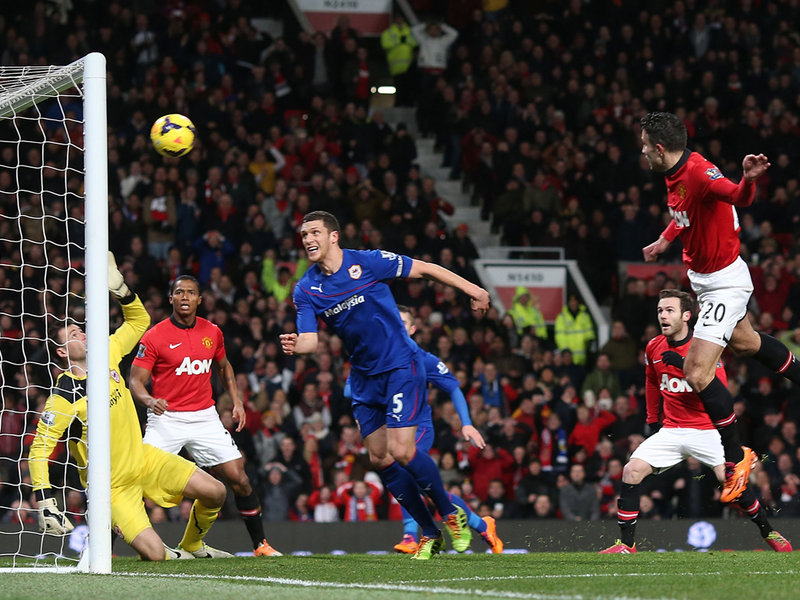 Mata completed 83 minutes of his debut following his club-record £37.1million move from Chelsea.

The midfielder made an immediate impact, sparking the move that led to Van Persie's sixth-minute opener.

And while manager David Moyes will doubtless expect an even greater contribution as Mata gets used to his new surroundings, it is evident United's supporters have been uplifted by the 25-year-old's arrival as they offered a standing ovation when he was replaced by Adnan Januzaj.

By then, Young had belted in an excellent second to ensure the highpoint of Ole Gunnar Solskjaer's Old Trafford return was the reception he received from the home fans as his side remained at the foot of the Barclays Premier League.

There were so many sub-plots prior to kick-off that Van Persie's potential return was shunted down the list.

The Dutchman had missed 11 games since tweaking a thigh muscle taking a corner in the Champions League win over Shakhtar Donetsk on December 10. It was a further five since his last goal.

Van Persie's value to the Red Devils cause is underlined by the fact that in his absence United had lost six times, seen their title hopes evaporate and been knocked out of both domestic cup competitions.

How different results might have been had last season's Golden Boot winner been available to Moyes.

His impact tonight took just six minutes. Mata was involved, delivering an excellent cross-field pass to Patrice Evra as United switched their point of attack. Young then who swung over the cross, which Antonio Valencia crashed against the bar with a flying header.

Van Persie was onto the rebound in an instant. And though David Marshall kept it out, the Dutchman pounced on the loose ball to put United ahead quicker than in any other game on home soil this season.

For a period it looked as though Moyes would see his team capitalise.

Young almost reached another Mata cross, Jonny Evans sent a back header just over and Van Persie fired wide from an acute angle.

In addition, Craig Bellamy was booked for kicking the ball away at a disputed free-kick and Solskjaer sat slumped in his seat, growing weary, no doubt, of responding to repeated songs of affection from the home support.

Slowly, though, Cardiff began to get a foothold in the game.

Craig Noone ended a forceful run in disappointing fashion when he belted his shot over.

Mark Hudson forced a decent save out of David de Gea, who also got himself in a tangle with Evans that was fortunate to end with nothing worse than the concession of a corner.

Cardiff maintained their momentum after the break.

Had Declan John's cut-back been accurate, Campbell would have had the easiest of finishes. As it was, the ball rolled behind the forward, as it did at the other end when Rafael tried to find Van Persie in similar circumstances.

United needed a spark and Young provided it with a fantastic goal, cutting in from the left wing before firing into the bottom corner.

Mata had a shot saved by Marshall and a speculative curling effort from Evans floated wide not long after Wayne Rooney had replaced Van Persie.

Despite their side's woes the home fans had not lost their sense of humour as a chant of "we are staying up" proved, as United secured a win that took them onto 40 points.

Valencia was denied a third when Marshall pushed his shot onto a post, which would have represented United's biggest home win of their largely troubled campaign.