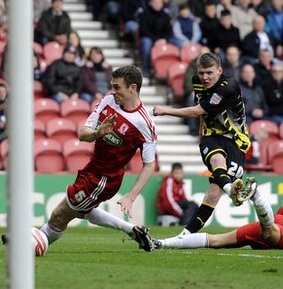 Boro winger Adam Hammill struck the post with a vicious shot early in the second half and substitute Marvin Emnes forced Cardiff goalkeeper David Marshall into a fine save with 15 minutes left, but otherwise Tony Mowbray's side were restricted to long-range efforts as they chased the game after the break.

Both sides had seen their play-off chances falter in recent weeks after drawing their previous four matches and, while the Bluebirds' second win in 11 games lifted them a point above seventh-placed Brighton, Boro have now failed to win any of their last seven and drop down a place to eighth.

Cardiff quickly overcame an early injury to striker Kenny Miller, forced out of the action in the sixth minute, to take the lead five minutes later.

Bluebirds midfielder Lawrence swung over a corner and defender Turner rose above the home defence to plant a firm header into the bottom corner.

Boro striker Lukas Jutkiewicz spurned a golden chance to equalise when he headed Joe Bennett's cross wide in the 17th minute, but within 60 seconds Cardiff had doubled their lead.

Lawrence was again the provider, playing the ball across the six-yard box from the right and Mason, Miller's replacement, was left unmarked to sidefoot the ball into the bottom corner for his 10th goal of the season.

Boro defender Seb Hines headed Hammill's corner straight at Marshall and Jutkiewicz dragged a 20-yard shot wide, but Cardiff were only denied a third goal just before the break when Boro goalkeeper Jason Steele kept out Mason's shot from inside the area with his feet.

The home side raised the tempo after the restart and were denied by the woodwork when Hammill's angled drive hit the post in the 48th minute.

Marshall then held a shot from Boro midfielder Nicky Bailey and striker Scott McDonald rifled a shot over the crossbar.

But Boro were restricted to long-range efforts. Robson's free-kick was easily held by Marshall, McDonald skewed another effort from the edge of the area off target and Hammill fired straight at the Bluebirds' goalkeeper from 20 yards.

Jutkiewicz headed McDonald's cross just wide in the 86th minute and substitute Bart Ogbeche was wayward with his shot from outside the area, while defender Stephen McManus lifted his effort over the crossbar in the closing stages.