The Magpies were leading through Papiss Cisse's 61st-minute strike when the Norwegian sent on Craig Noone and Fraizer Campbell, and the pair combined to turn the tie around.

Noone hammered an unstoppable 73rd-minute shot past keeper Rob Elliot within seconds of his arrival to level, and then Campbell took advantage of some dreadful marking to head home the winner from Peter Whittingham's corner seven minutes later. 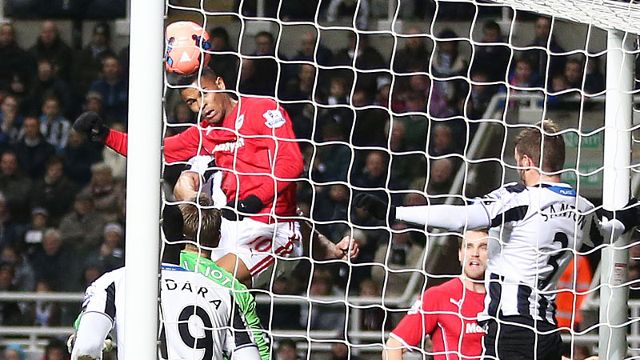 Hatem Ben Arfa had earlier been denied by both the post and the bar and although former Sunderland frontman Campbell too struck an upright at 1-0, the Magpies were made to pay for not making the most of the wealth of possession they enjoyed before Noone's intervention in front of a largely horrified crowd of 31,166.

Solskjaer will now get down to work in earnest with Barclays Premier League survival his main focus, but also with a fourth round tie to which to look forward, while opposite number Alan Pardew will reflect upon another early exit from a competition in which he has won just one game in his three years on Tyneside.

Pardew indicated he would make changes as he prepares for a fifth game inside 15 days, and he was as good as his word as seven of the men who started the 1-0 league defeat at West Brom on New Year's day made way.

However, he was still able to name a strong side which included Elliot, Steven Taylor, Mapou Yanga-Mbiwa, Vurnon Anita, Cisse and Ben Arfa.

Solskjaer, who is still getting to know the players he inherited from Malky Mackay, opted for five changes and, after a low-key start, it was the Bluebirds who settled into a rhythm the quicker.

Indeed, they thought they had taken a ninth-minute leader when skipper Mark Hudson powered a header past Elliot from Whittingham's corner, only to be penalised for a foul.

With Whittingham and Kim Bo-kyung pulling the strings in central midfield, the visitors mounted a sustained period of pressure during which Kim and Don Cowie, who had earlier headed weakly at the keeper, both fired over.

Anita belatedly tested David Marshall at the other end with a tame 17th-minute shot from distance, but it was Ben Arfa who took up the baton as the half progressed.

The France international sent a 19th-minute effort just wide and then rattled a post with a thundering shot after twisting away from Whittingham and Peter Odemwingie six minutes later.

But for all the home side were starting to dominate, they could not trouble Marshall to any great extent and it was Elliot who had to be on his toes in injury time to turn aside Aron Gunnarsson's long-range strike.

Given their manager's complaints over the recent fixture schedule, Newcastle returned determined not to add a replay to their list of commitments, and Ben Arfa took it upon himself to ensure that was the case.

The Frenchman picked up possession after Cisse had done well to collect Davide Santon's ball over the top and powered his way into the box and shot, only to see Marshall somehow turn it on to the top of the crossbar.

Marshall had to claw Moussa Sissoko's looping header from under the bar a minute later with the Magpies going for the kill, and with skipper Cheick Tiote setting the tone with a series of crunching challenges, the tempo was increasing by the minute.

The pressure finally told with 61 minutes gone when Yoan Gouffran played the ball over the top for Sissoko, who delayed and saw his effort blocked by the sliding Ben Turner.

However, Cisse followed up and despite Hudson's best efforts, turned the ball past Marshall for his third goal of the season.

Cardiff might have been back in it within five minutes but Cowie flashed a header wide of the post from Gunnarsson's driven cross, and they were unfortunate not to be level with 20 minutes remaining when Campbell struck the foot of the post and Odemwingie skied the rebound.

But the visitors were level within three minutes when Noone, who had only been on the pitch for seconds, smashed a left-footed piledriver past Elliot's despairing dive.

And there was worse to come for Newcastle when they left Campbell criminally unmarked to power home an 80th-minute header from Whittingham's corner to win it.