Fabian Schar proved the unlikely hero after his double moved Newcastle out of the relegation places with a 3-0 win over fellow strugglers Cardiff City, writes Sky Sports.

Starting the day in the drop zone, there was a feeling around St James' Park that this was a must-win encounter and Schar, who had never scored for the club, scored either side of the break (24 & 63) and Ayoze Perez added a late third (90+3). 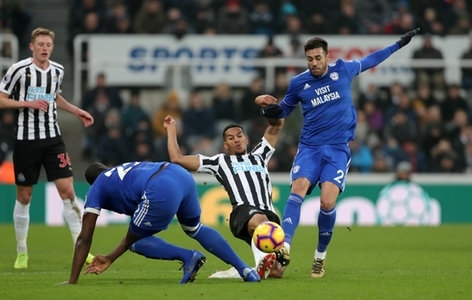 The victory was a timely boost for Rafa Benitez's team who had slipped down the table after a run of just one win in their last nine games.

Meanwhile, this victory lifts them above Cardiff, who drop into the bottom three and are now two points from safety.

In front of owner Mike Ashley, who was back among a crowd of 49,864 at St James' Park for the first time since November 10, Newcastle looked nervy in the opening stages against a Cardiff team that had new signing Oumar Niasse in attack.

Perez drew some noise from the crowd when Neil Etheridge tipped over his glancing header on 13 minutes.

With the game drifting, Schar gave the hosts the lead in spectacular fashion on 24 minutes.

The defender decided to drive forward with the ball and Cardiff backed off. He strode into the box before steadying himself and side-footing expertly into the bottom corner.

Cardiff threatened a fightback after the break but the Newcastle defence stood firm. It gave their attack a platform to build on and it was soon 2-0. Jamaal Lascelles rose to flick on Matt Ritchie's corner and Schar arrived to bundle the ball home for an unlikely double salvo.

The hat-trick did not materialise, despite heading a presentable chance wide and Perez rubber-stamped the win at the death as he scored from close range after some clever play from Rondon.