On a day when several hundred home fans carried out their threat to walk out of St James' Park before the end of the game after losing patience with owner Mike Ashley and manager Alan Pardew, Shola Ameobi's first-half header set his side on the road to a lacklustre 3-0 victory. 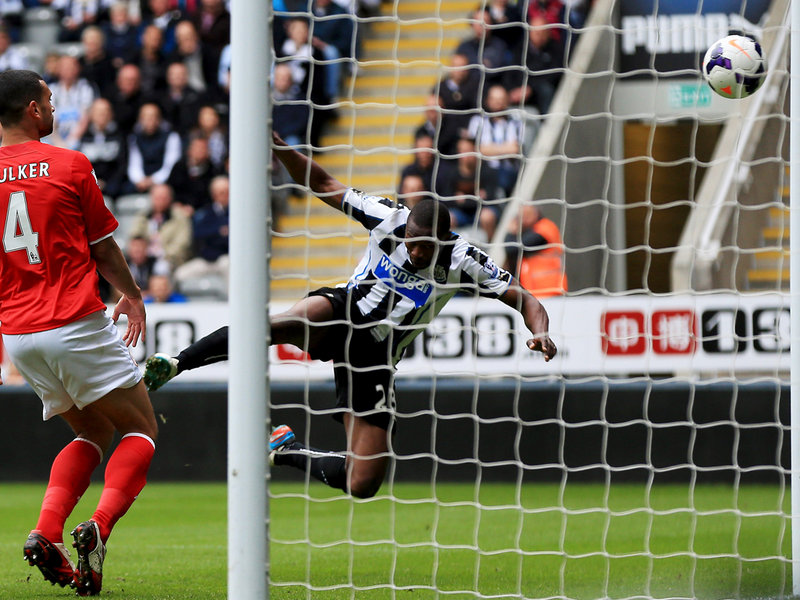 The visitors rallied and looked like they might get something out of the game, but late strikes from Remy and substitute Steven Taylor, coupled with Sunderland's shock win at Manchester United - their first since 1968 - ensured that Ole Gunnar Solskjaer's men will be playing in the Football League once again next season.

It was never likely to be a comfortable afternoon for Pardew whatever happened on the pitch, with many fans arriving in mutinous mood and some departing on cue after 60 and then 69 minutes.

Large sections of the home support sang anti-Pardew and Ashley songs throughout and voiced their support for discarded midfielder Hatem Ben Arfa, who was among the crowd.

Pardew has vowed to spend more time on the bench rather than in the technical area after his ugly clash with Hull's David Meyler, and he maintained a low profile for much of the game, although he was booed by some fans whenever he did make it on to the sideline.

Nevertheless, the 52-year-old would have been reasonably pleased with what he saw before the break as his side dominated and took a deserved lead which might have been more decisive.

However, the defensive frailties which have haunted the Magpies in recent months remain and they might have been exploited on another day.

Newcastle were fortunate not to be behind with just six minutes gone when Krul's weak punch fell to striker Fraizer Campbell on the edge of the box, and he steered his effort wastefully wide.

But it was opposite number David Marshall who kept his side in the game as the hosts hit back.

He produced two fine saves within seconds to keep out full-back Mathieu Debuchy's well-struck 16th-minute shot and then his bullet header from the resulting corner.

However, he was left helpless with 18 minutes gone when Moussa Sissoko crossed from the right for Ameobi, who had pulled away from marker Steven Caulker, to head firmly home.

Newcastle looked as if they might run riot, with Sissoko seeing a shot and then a cross deflected against the woodwork, while Cheick Tiote drilled an effort wide after a flowing move.

But in the meantime, the visitors might have got themselves back into the game as Wilfried Zaha made his mark.

The winger, who had started on the right, decided to try his luck on the opposite flank and tricked his way past Debuchy before firing in a 29th-minute shot which Krul blocked instinctively with his trailing leg.

Zaha got in behind Debuchy once again two minutes later, but this time the defender recovered to make a vital interception.

Pardew's men restored a measure of order as the first-half approached its conclusion, but the game was far from over as they re-assembled in the dressing room.

However, it was central defender Ben Turner who caused panic in the home defence when he latched on to a half-cleared 48th-minute corner, but steered his shot wide.

Bellamy made an impact as he gave the visitors greater impetus going forward, and his pass to Campbell allowed him to send in a right-wing cross which floated across goal and just wide of the far post.

Central defender Mike Williamson saw a 57th-minute shot deflected wide as Newcastle responded, but the flow of play was largely towards his goal, although with the Bluebirds unable to find any kind of cutting edge.

But they might have been back in the game with 14 minutes remaining when Jordon Mutch headed down for substitute Kenwyne Jones to poke the ball towards goal, only for Krul to block. And when the Dutchman spilled Bellamy's cross seconds later, Gunnarsson's effort was smuggled away by Coloccini.

But Cardiff's fate was sealed at the death as Remy tapped home after Tiote's 87th-minute shot had been blocked into his path, and Taylor completed the scoring in injury time when he stabbed home from Remy's knock-down.