Cardiff got their bid for automatic promotion from the Sky Bet Championship back on track with a hard-fought 2-0 win at Norwich, writes PA Sport.

The Bluebirds were on the back foot for long periods but held firm and nicked all three points with goals in the final five minutes from Kenneth Zohore and Junior Hoilett.

It was a timely boost for the visitors, who had taken just one point from their three previous fixtures to slip out of the top two, but they still have their destiny in their own hands as the season heads for its climax. 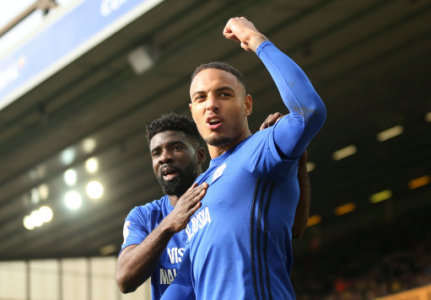 With nothing but pride to play for Norwich gave a good account of themselves in an exciting first half and should really have been ahead at the break.

Dennis Srbeny tested Bluebirds keeper Neil Etheridge with a low shot after just nine minutes while the Canaries went even closer on the half-hour mark when a quick Moritz Leitner corner caught the visitors napping and Srbeny flicked the ball against the upright before it was hacked to safety.

Then, on the stroke of half-time, substitute Bruno Ecuele Manga carelessly gave away possession inside the box, allowing Leitner to square for the busy Srbeny, who was thwarted by an excellent block from Sean Morrison.

Cardiff also had their chances in an exciting first half. Craig Bryson fired their best chance over after 17 minutes following a slick move while it took a timely intervention from Harrison Reed to prevent Hoilett from pulling the trigger midway through the opening period.

Neil Warnock's side also went close early in the second half, with Ecuele Manga nodding an inswinging free-kick from Hoilett just off target but it was still Norwich who were on the front foot and James Maddison saw a decent effort from distance go just over after 55 minutes.

Alex Tettey then fired wastefully high and wide when a loose ball dropped kindly for him in the area before Leitner saw a goalbound shot deflected wide.

Warnock brought on Zohore in an attempt to get his side firing and it almost did the trick after 78 minutes as the frontman latched onto a ball into the danger area by Hoilett and was only just off target.

But four minutes from time the substitute did break the deadlock. Angus Gunn did well to block Zohore's header after he had beaten the offside trap but the striker kept his cool when the ball broke clear, sliding home from a tight angle to give Cardiff the lead against the run of play.

Hoilett added a second in injury time, volleying home from the edge of the box after a loose header from Tettey, to complete a scoreline that was extremely harsh on Norwich.