Kieffer Moore scored his first goals for Cardiff since joining from Wigan to pile the misery on Sabri Lamouchi and Nottingham Forest as the visitors won 2-0 at the City Ground. 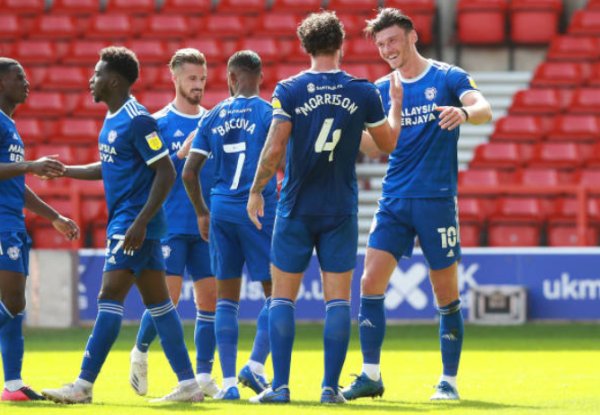 The Wales forward opened the scoring inside three minutes with a towering header from Marlon Pack's corner and added a second late on in the first half with a predatory finish from Sean Morrison's knock-down.

It was another frustrating afternoon for Forest, who despite being much improved in the second half could not find a way past an inspired Alex Smithies in goal, with Lewis Grabban and Ryan Yates missing their best chances.

The result means Cardiff have collected their first points of the campaign while Forest suffered their third straight loss and are winless in their previous nine games stretching back to last season.

Cardiff spent £2m to sign Moore from Wigan following their demotion to League One and the 28-year-old opened his account for his new club with a trademark finish, rising high above his marker Tobias Figueiredo to power a header into the net.

While the Cardiff striker was clinical in front of goal, Forest's main attacking threat Grabban was not as he passed up a huge chance to equalise, volleying an effort high over the crossbar after being found at the back post by Luke Freeman's searching cross.

Lamouchi was clearly unhappy at what he had seen from his side in the opening stages as he summoned Lyle Taylor from the bench after 35 minutes to replace Joe Lolley in a tactical switch. The move failed to pay off as Moore added his second goal just five minutes later from close range.

Forest rallied in the second half and went close to pulling one back with 53 minutes played when Yates' header into the turf bounced up and forced Smithies into an acrobatic stop. Similarly to Grabban before him, Yates will feel he should've scored.

Grabban was denied by Smithies again after his volley from close-range was blocked by the onrushing Cardiff goalkeeper, while the hosts felt that they should have had a penalty when Jack Colback went to ground after a tangle of legs with Joe Ralls.

Forest's improvement was evidenced by the fact that they out-shot Cardiff ten to one in the second period but their final effort - a wasteful strike from Taylor that flew over the top in stoppage time - epitomised their profligacy in front of goal and Neil Harris' side were ultimately deserving of their win.