Cardiff continued their revival under Neil Warnock as they made it three games unbeaten with a 2-1 victory at Nottingham Forest in the Sky Bet Championship.

First-half goals from Aron Gunnarsson and Joe Ralls put the Bluebirds 2-0 up by the interval at the City Ground, and the hosts were reduced to 10 men early in the second half when Thomas Lam saw red. 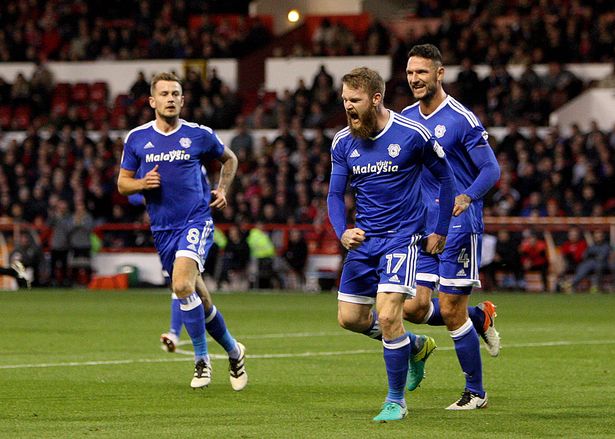 A Henri Lansbury penalty at the death reduced the arrears but in the end proved little consolation as Forest suffered a second straight loss.

It should have been 1-0 to the visitors with six minutes on the clock, when Ralls found himself through one on one with goalkeeper Vladimir Stojkovic

But the Cardiff midfielder spurned his chance, slotting the ball wide of the upright.

Gunnarsson made no mistake with 28 minutes on the clock, however, netting against the run of play.

Forest had enjoyed a good spell of possession, but struggled to create an end product and they were punished for poor marking at a corner.

Gunnarsson was left with a free header from Peter Whittingham's flag-kick and made no mistake from close range to make it 1-0.

City were then dealt a blow when Rickie Lambert was carried off on a stretcher eight minutes before the break, having been injured in a collision with Stojkovic.

But it made little difference to his team's momentum as they went two goals up in the 39th minute.

However, Ralls was on hand to head home on the rebound, leaving the hosts to head down to tunnel with boos ringing out from the stands at the break.

And it did not get any better for Forest in the second half as they were reduced to 10 men with 58 minutes gone.

It was a straight red card for defender Lam after he pulled back Pilkington as the Cardiff man looked to break clean through.

The Bluebirds tried to make that numerical advantage count and it was left to Stojkovic to keep the score down, with the Reds goalkeeper producing two great reaction saves to deny Sean Morrison and then Ralls.

Pilkington then had a great chance to make it 3-0 and clinch victory with 15 minutes to go.

Having rounded Stojkovic, he was denied by a goal-line clearance from Chris Cohen before missing an open goal as he fired the follow-up wide.

Forest were given a lifeline with 90 minutes on the clock when they were awarded a penalty for Gunnarsson's foul on Lansbury in the box.

The midfielder stepped up to take it and drilled the spot-kick home, but there was no time for his side to find an unlikely equaliser.