Neil Harris is enjoying his first weeks in charge of Cardiff City. After recovering from being 2 nil down at Charlton last weekend he's seen his new side save that game with a 2 - 2 draw followed by two 1 nil wins. 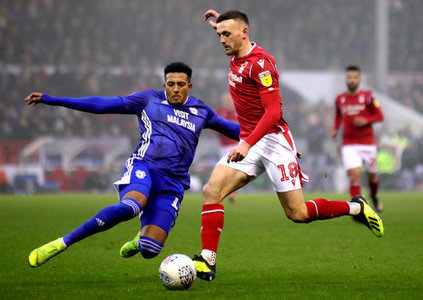 Cardiff were garteful to Stoke having no strikeforce last Tuesday and even more grateful that the Forest forwards on Saturday were wearing clown shoes.

Forest started purposefully before Mendez-Laing curled a low right footed shot into the bottom right hand corner in the 14th minute. That set up a period of domination for Cardiff with Forest vsibly shaken by going a goal down. The home side gradually regained control but what followed left the home fans frustrated and the Cardiff fans ecstatic.

Forest created themselves 32 efforts on goal but incredibly only two were on target. Cardiff defended resolutely while Forest saw shots hit all areas of the Trent End behind Neil Etheridge's goal.

Ironically the best chance of the second half fell to Cardiff. Mendez-Laing's cross found Gary Madine and instead of blasting the ball at the goal Madine squared for Junior Hoilett to score into an unguarded net but the effort was weak and a Forest defender cleared off the line.

For a second game in a row City kept a clean sheet and with it bagged their first three points from an away game this season. It was a fifth straight away win at The City Ground with the Bluebirds unbeaten thier last 10 games against Forest. The local reporters admitted after the game that they just don't beat Cardiff, however much they feel they deserved to.

Next Saturday Cardiff are back at CCS to face bottom side Barnsley. The Terriers beat Hull on Saturday to record only their second win of the season. The first came on the opening day.